A game that changed the course of history 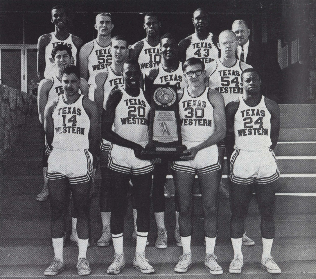 The complete '66 team posing with the trophy outside of Memorial Gym.

One thing that the general population doesn’t understand about sports is that it is a reflection of life itself. Sure at times it can be trite and overvalued, but most of the time it goes beyond the entertainment aspect it provides and life lessons can be taken from it.

There is no better example than the 1965-66 Texas Western basketball team, known by people who attend UTEP as the Miners’ lone national championship team in the program’s history. But the team was so much more than that.

Sporadically throughout the years, we have been reminded by Hall of Fame induction speeches, a movie and the anniversaries of the national championship game, but the impact of Texas Western beating an all white Kentucky team with seven African-Americans is very much unknown.

The Miners 72-65 win was more than a David beats Goliath story, even though prior to the game, the Washington Press said, “Texas Western could not stand up to Kentucky.”

The win itself changed the way African-American athletes were viewed and helped bring about the process of breaking down racial stereotypes.

Although African-Americans athletes were praised for their athleticism, they were brought down by a cruel stereotype that deemed them as unintelligent athletes who could not lead a team and be depended on with the game on the line.

Harry Flournoy, who was the starting forward on the 1965-66 Texas Western team, addressed the stereotype in the team’s 2007 induction into the Naismith Memorial Basketball Hall of Fame.

The impact of the game was felt immediately. The following year, schools in the south starting recruiting and integrating African-American players on to their teams. Although it was a gradual process, there was change and progress was being made.

In 2011, 78 percent of the NBA’s players were black, giving the NBA the highest percentage of African-Americans in any of the four major sports in the United States and Canada. Drastic changes in demographics like this do not go unknown to players such as Flournoy.

“We’re so glad when we see today’s game and we see the diversity in today’s game. It does our hearts good,” Flournoy said.

Whereas UTEP constantly mentions the game and the team, almost to the point of sensationalizing the accomplishment and overshadowing other great athletic achievements such as the track and field athletes and its program, the national media rarely displays the significance of the story.

Outside of the city of El Paso, the game and its significance is lost among the younger generations. Sadly, history in this country is taught in a paternalistic manner, where we sensor our history to a G-rated version. The Texas Western-Kentucky game is in the same realm with historic moments such as Martin Luther King Jr. “I have a dream speech”, Rosa Parks refusing to give her seat up in the front of the bus and Muhammad Ali refusing to serve in the Army during the Vietnam War. A moment in time that was part of the greatest civil rights movement in American history is brushed aside because it’s a sport.

If society does not recognize March 19, 1966 as a day in which, social segregation was changed and inclusivity was welcomed then, we as a society have failed to learn our history. The highlights of the game and final score are irrelevant to the actual impact of the game.

If that game did not exist then the inclusion of African-American basketball players into college basketball’s elite programs might have taken even longer. Players who attended southern colleges such as Michael Jordan, Bernard King and David Thompson may have never come to fruition.

Respect needs to be given to the progressiveness of Don Haskins, and the brilliant team that he coached. In the latter years of coach Haskins life, he reviewed the impact the game had in his 2005 book “Glory Road: My Story of the 1966 NCAA Basketball Championship and How One Team Triumphed Against the Odds and Changed America Forever.”

“No matter where I travel, people come up to me and thank me for starting five black players. I’d be somewhere, decades later, and all of a sudden a black man would come up to me and want to shake my hand and thank me… This kind of stuff blew my mind,” Haskins said in his 2005 book ‘Glory Road’.

“It’s a commitment that you have to make to give back to that game. It’s not about the money, it’s not about the material things, those things are highly overrated. It’s about giving back things that were given to you. All things are possible, you only have to believe.”