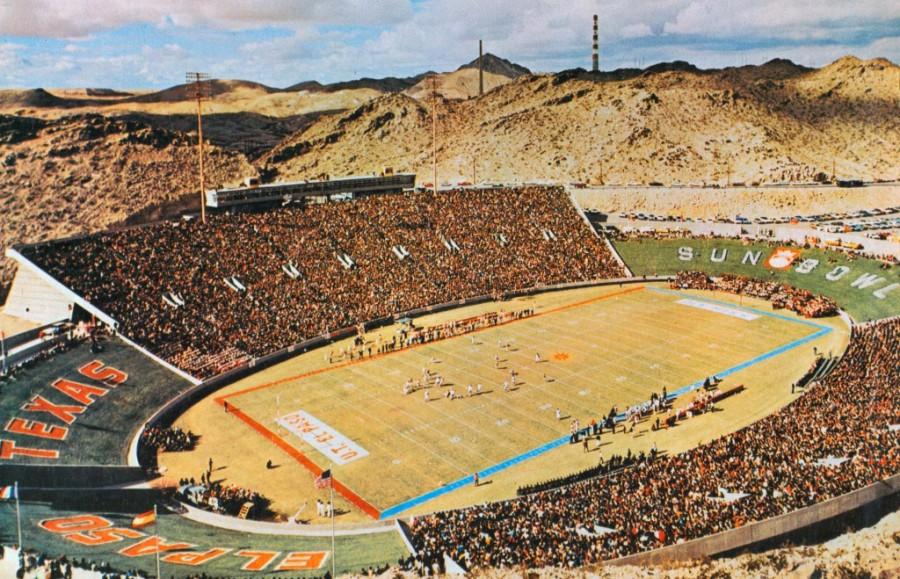 There is no way but up when you are at the bottom of the pit. That’s been the saying surrounding UTEP football since its inception back in 1914. Although the program’s history is just as long as the university itself, UTEP football has not garnered any historical relevance that their Texas counterparts in Austin or College Station have.

Despite having quality players, coaching staff and a beautifully built stadium, the Miners have never achieved any significant success, or had a decade or era that was worthwhile. The 52,000-seat Sun Bowl Stadium usually finds itself almost empty as the season progresses.

The sea of empty seats paints the picture as to what is UTEP football, a glass half-full program.

Each season starts with newfound hope and ends in disappointment and frailty. This has become the norm in El Paso, almost to the point of being a cyclical process.

The latest edition of the Miners falls right into the historical category of bad teams at UTEP. The 2013 Miners went 2-10 on the season, posting one of the worst offenses and defenses in the nation statistically. Nevertheless, the 2014 Miners are back with a new sense of hope and confidence.

“Our attitude and mentality is completely different from what it was last season,” said quarterback Jameill Showers. “This is do or die for us, and this is the last chance for the seniors to prove that we can play at the next level. I know everybody is excited to get back to work.”

Senior tight end Eric Tomlinson knows UTEP’s history of losing seasons and is all too familiar with that fact during in his three years in El Paso, despite the fact that Tomlinson is not paying attention to the past.

“We just have to stay focused,”  Tomlinson said. “We can’t let the past dictate the future, we have to stick together as a team and don’t let outside distractions dictate our season. There are a lot of expectations, but we are out here trying our hardest.”

The Miners are definitely full of restored hope and confidence, but that still does not turn into success on the field.

Head coach Sean Kugler knows that better than anyone associated with UTEP football. Kugler was an offensive lineman at UTEP from 1984-88. During Kugler’s time as a player at UTEP, he was part of some of UTEP’s worst teams. Now as the head coach, Kugler has been adamant about holding the program to a higher standard, stating back in February that if he can’t turn things around, then his resignation will follow.

“I didn’t come down here to lose games, I’m not going to go through seven straight losing seasons. I don’t want to put the fans through that,” Kugler said, referring to Mike Price’s seven losing seasons from 2006-2012. “If this thing isn’t right in three seasons, I’ll walk—I promise—without pay, I don’t care. We are going to get this turned around. I promise you that.”

Any realistic fan or person with knowledge of UTEP football knows most likely that Kugler will struggle and probably fail like past head coaches. Whether Kugler is actually trying to set a new standard for a historically bad programs or giving the old cliché response to media questions, the rhetoric is much different from the past.

“Were not going to stand pat and do the same things we did last year and expect success,” Kugler said. “There were things we didn’t do well and we need to get better at that. There will be some changes.”

Kugler’s expectations and talk will all come to a stand still once the season begins. The Miners’ first four games will give an understanding as to how much has changed, if anything has changed at all.

The Miners open their 2014 campaign against their old rival New Mexico, who beat the Miners last season in Kugler’s homecoming game, 42-35 in overtime, and their first home game will be against the Texas Tech Red Raiders—a nationally ranked high-scoring pass offense. The Battle of I-10 against New Mexico State and a trip to Manhattan, Kansas, to play Kansas State will sum up the last two games before conference play.

By the end of their non-conference schedule, the Miners can be on a path to success or off to another bad start, possibly with an 0-4 record by the
end of September.

Will these next 100 years be different for UTEP football is the burning question? Starting on Aug. 30, that question will be answered.