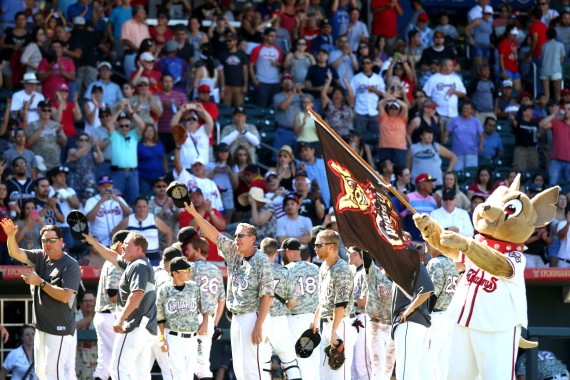 Chihuahuas teammates wave goodbye to sold out crowd after finishing their first season. 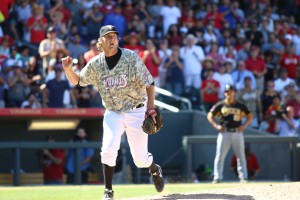 There were trials and there were tribulations, but that did not stop the El Paso Chihuahuas from putting on a show for the rambunctious fans of El Paso one more time as they defeated the Salt Lake Bees 10-4. The season is now over but the yearlong memories that have transpired will last a long time.

The Chihuahuas entered the today’s game one game below .500, although the win wouldn’t change the Chihuahuas fate, the significance of finishing .500 in a season like this would mean so much more.

The setting was perfect— Labor Day weekend, sun shinning, and another sold out game. The fans and players expected nothing short of a win. The Bees struck first with one run in the first inning, but the Chihuahuas came right back in the bottom of the first with a run of their own.

The third inning was the game changer— the Chihuahuas exploded for eighth runs to blow the game wide open, the never ending hit parade was one of the best offensive innings the Chihuahuas have had all year.

The game was essentially over after the third inning, the Bees put together a solid fourth inning but the atmosphere changed. The season was over for both teams, Salt Lake finishing a disappointing 21 games back of the playoffs and the Chihuahuas finishing on a strong note.

The next five innings were subtle; the game itself became irrelevant as the fans started to realize that the season of fun was now coming to an end. Manager Pat Murphy started to take players out, to which the fans gave standing ovations. Jason Lane and Cody Decker receiving the loudest, who were idolized and loved by fans all year long, seemed gracious and honored by the chance to play in El Paso.

Relief pitcher Stephen Kohlscheen came on to close the game out, and with the Bees down to their last strike the fans cheered and applauded and roared as the last batter flew out. A season of trials and tribulations turned out to be all right.

All that is left now is an empty Southwest University Park; downtown El Paso now seems empty again. The Chihuahuas have left a huge void, and all the city can do is wait till next April for that void to be filled.