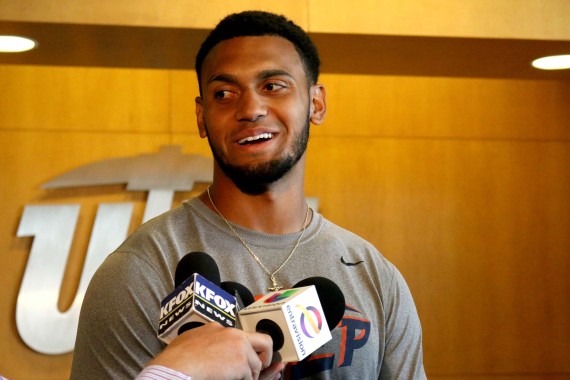 The UTEP football team is on its way to Alpine for training camp and despite being picked to finish dead last in the conference by 13 coaches, optimism within the team remains high, especially on defense.

“I love going away to camp and the chemistry on the team is very good,” said head coach Sean Kugler. “It furthers it when you can get together as a large group and stay in tight quarters for a couple weeks.”

Defense was without a doubt the Achilles heel of the squad last season. If the Miners want to succeed,  defense will have to be the focal point during the season.

Defensive back Wesley Miller is fully healthy once again and will be key if he can stay on the field. The senior appeared in four games last season, three of which he started.  The new coaching staff was definitely an adjustment for Miller, with a new head coach and defensive coordinator, Scott Stoker.

“It was all new,” Miller said. “It happened so fast when we switched our defensive coordinators. Now we have been in the system for over a year now and we’ve expanded the playbook.”

Quarterback Jameill Showers pointed out the vast improvement he has seen in the Miners defense during the offseason.

“I know defensively we have gotten 10 times better,” Showers said . “They just had time to actually learn the defense. Last year they were thinking too much and the defense is playing a lot faster now.”

One of the most crucial characteristics of the team at the moment is that they are all healthy and in football shape going into the final stretch of the offseason. This allows for a more competitive training camp when vying for starting positions.

Coach Kugler is interested seeing the battles at the linebacker position as well as his secondary,  coach Kugler said these positions are full of talented players.

Despite all the improvements, every coach in Conference USA has not given UTEP much credit. The Miners were picked to finish dead last in the conference, but the players and head coach know that preseason rankings mean nothing.

“We’re not paying attention to that stuff,” Showers said.

If one thing is for sure, it is that the starting quarterback and head coach are not interested in superfluous preseason rankings.

“I don’t worry about any of that stuff,” said Kugler. “You win games and everything takes care of itself. The team vastly improved in the spring and I look for the same in the fall.”

Flying under the radar going into the 2014 campaign will be the receiving core. With senior tight end Eric Tomlinson making the preseason conference USA team, Showers said he is excited about his sophomore wide receiver Brandon Moss, who he said is a great route runner.

Last year, the duo of Showers and Jordan Leslie was a potent tandem for the Miners. With Leslie’s transfer to BYU, Showers sees senior Ian Hamilton as that replacement and has a different mentality heading into the fall.

“We have a different mentality and different attitude this year. Win football games and go to a bowl,” Showers said.

With a full offseason to learn the defense, all players healthy, and a good mindset, UTEP and the city has plenty to be excited about.