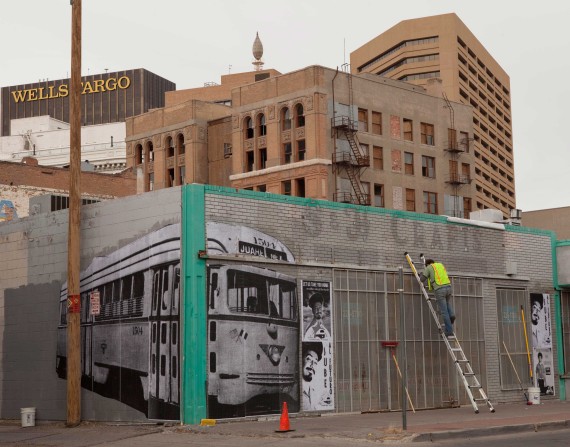 Funding of $97-million has been approved by The Texas Transportation Commission to restore a trolley project in downtown El Paso after service ceased 30 years ago.

The project may include refurbished cars, which were originally used from 1950 to 1974. Work on bringing the trolley system back is projected to start as early as August, with completion slated for 2018. The project is part of $2.2 billion in funding that the commission is adding to the state’s Unified Transportation Program, $34 million of which will also fund the finalization of interchange between Loop 375 and I-10. El Paso businessman and chair of the commission, Ted Houghton, is a proponent of the project.

The past trolley system was an advantageous form of transportation and a tourist attraction in El Paso. El Pasoans such as Peter Svarzbein have wanted the system to be restored for many years. Svarzbein is a local artist and founder of The El Paso Transnational Trolley Project, a group of local residents who favor the return of the trolley system and say it will enrich the future of the city. Svarzbein started the project from what was originally his master’s thesis from the School of Visual Arts in New York City.

“Our city is called The Pass of the North,” Svarzbein said. “I took the representation of the crossing between both cities as a way to showcase the historical and cultural nature of El Paso. The trolley and the bridges are symbols of what it’s like to be from
the border.”

It eventually evolved into the project, which strives to influence El Pasoans to envision a better future for both El Paso and Ciudad Juárez. The project has been pushing the topic by gathering signatures for a petition, made up ultimately of approximately 1,800 signatures.

When the trolley system was in place, it ran across the border, carrying passangers to and from Juárez and the El Paso Sunset Heights area

Originally, the city wanted to sell the streetcars, but the El Paso Transnational Trolley Project requested that the Transportation Committee refurbish them, which Svarzbein said are the oldest models in the country.

“They’re even older than San Francisco’s. That is a very high historical value,” Svarzbein said.  “The reason it is important we utilize the original streetcars and not replicas is that the El Paso community deserves for the project to be true to its nature, to its history. There is enough money to do so and the city should recognize that we should preserve and honor our
local culture.”

State Representative Joe Pickett, D-El Paso, wasn’t as enthusiastic about the approval. Pickett said that although the project may be lucrative for the city, it is also an irresponsible move from the commission.

“I’m not against the project itself,” Pickett said. “In fact, I think it is a great way to expose the history of the city and enrich the minds of those who didn’t get to live that particular time of El Paso, but there are other pressing matters.”

“The widening of the intersection at Zaragoza and Montwood won’t be happening anytime soon because of funding for projects like the trolley system,” Pickett said. “That intersection is the worse in West Texas.  There isn’t any funding for it, but yet we approve projects like the trolley system.  It doesn’t seem efficient. There are other projects that need to be finished or started before it.”

According to Pickett, funding for the trolley project isn’t coming from federal transit money or from private funds, but from Texas Department of Transportation money, which will eventually call for additional money to operate the system.

“Texas is a growing state, which in turn means it needs funding for more roads and transportation,” Pickett said.  “We aren’t moving forward with pressing issues like the one at Zaragoza and Montwood or Loop 75 because instead, we fund projects like the trolley system.  This approval has also upset other commission members and lawmakers.  They’re calling for a change in TxDot legislation so that approval of such projects are more overseen.”

In 2012, El Paso’s City Council spent $4.7 million to design the downtown streetcar line. The El Paso Transnational Trolley Project picked up their slogan—finish what we started—from this occurrence. Now, Svarzbein and others from the project hope to keep pressing for the completion of the trolley system and hopefully see if running it into Juárez as a possibility.

“The city has many options of transportation, but the trolley system is both educational and efficient,” Svarzbein said. “People commuting from Juárez can use it and people who thrive in the downtown area can move around in it and have lunch up the street on Mesa or Cincinnati and visit the social life in Union Plaza while conveying the
history of our city.”

The project expects for the streetcars to run from the Paso del Norte port of entry in downtown, go through the arts and entertainment district, up towards the UTEP area and down back through Segundo Barrio to the port of entry again.