Lawmakers argue over solutions to unaccompanied children at border 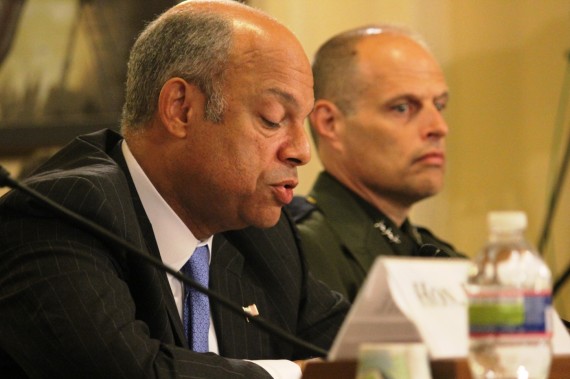 Jeh Johnson, secretary of Homeland Security, defends his department’s actions against criticism that is has not done enough to stop the influx of children at the U.S.-Mexico border. He testified at a House committee hearing Tuesday.

WASHINGTON – As an influx of thousands of Central American children continues at the U.S.-Mexico border, lawmakers argued over the effectiveness of long-term solutions proposed by homeland security officials involving better cooperation with Mexico.

“A key to solving this crisis is what the government of Mexico can do,” Jeh Johnson, secretary of Homeland Security said during a hearing Tuesday on Capitol Hill. “We have to think about what we can do to engage Mexico on our shared border security interests.”

As many as 60,000 children could arrive this year at the U.S.-Mexico border, mostly in the south Texas area. That is up from roughly 24,000 in 2013, according to the Department of Health and Human Services. Most of the children are arriving from Mexico, Guatemala, El Salvador and Honduras and often travel to the U.S. to escape abuse, find family members or find work to support themselves, according to HHS.

During the hearing before the House Homeland Security Committee, Johnson, Federal Emergency Management Agency Administrator Craig Fugate and Deputy Chief of Customs and Border Protection Ronald Vitiello defended the government’s response to the crisis and urged a focus on “stemming the tide of incoming migrants” – an initiative they said requires working with Mexico.

“Mexico is complicit in this human smuggling. There should be no more aid from America unless they step up and enforce better border regulations,” Miller said.

Government officials have been discussing the crisis with Latin American officials, Johnson said. Vice President Joe Biden visited the region last week to discuss the situation with Latin American leaders. He announced the U.S. will provide $9.6 million to help Central American countries repatriate their citizens and $40 million for an international development program in Guatemala to improve security for citizens, Johnson said.

“The humanitarian crisis we are seeing right now at our borders originates in Central America,” O’Rourke said. “So I think it makes a lot of sense to solve this problem in Central America rather than at the Texas-Mexico line. That’s going to be rough work. We have to deal with very basic problems of governance of rule of law, of security, that are forcing parents to make these difficult decisions.”

O’Rourke said a focus on stemming U.S. demand for drugs would be an effective way to improve the security in many Latin Americans countries by cutting off incentives for gangs that deal drugs and recruit children. He said that some of the billions of dollars in aid being sent to countries such as Afghanistan and Pakistan should be spent on development in Central America “where it’s really needed.”

One way to work with Central Americans countries would be public service campaigns highlighting the dangers of emigrating to the U.S.-Mexico border, Rep. Mike McCaul, R-Texas, said.

Many children and adults arriving at the border believe the U.S. government will grant them amnesty or allow them to join relatives already in the U.S. because of misinformation spread by drug cartels and human smugglers who profit by helping Central Americans across the border, Johnson said.

“It is beyond dispute that such a narrative shaped behavior and encourages people to come to our country illegally,” McCaul said. “This administration should send an unambiguous message that those arriving will be promptly sent home.”

The Department of Homeland Security has increased Customs and Border Patrol staffing at the border by transferring 115 agents from “less active sectors.” Johnson said he is considering hiring 150 more agents based on observations during a visit to the border region last week.

Some members of Congress criticized CBP for leaving security gaps along the U.S.-Mexico border because agents in “less active areas” are being recruited to help handle the influx of children in south Texas. Deputy Chief of CBP Ronald Vitiello said assigning CBP officers to help process children and adults at the border was not a security threat. He said his department was “adequately staffed and that he is comfortable with the resources he has available.”

“These people are coming to an area that is well known and well-controlled by us,” Vitiello said.