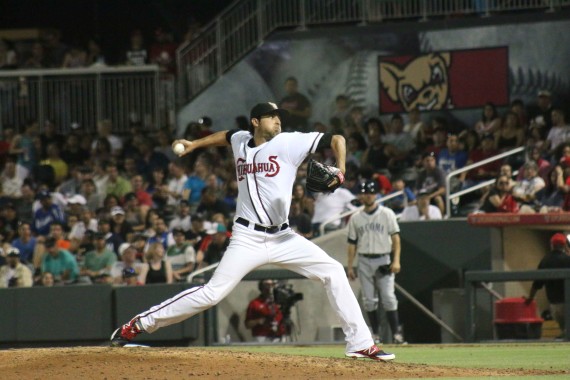 Relief pitcher Tim Sexton came on in relief to help close out the Rainiers.

What began as an efficient night for starting pitcher Keyvius Sampson quickly went south as the Tacoma Rainiers routed the El Paso Chihuahuas 13-4 tonight at Southwest University Park.  In front of a crowd of 6,558 and a scorching 102 degree weather, El Paso was trying to seal the series sweep and get back to .500 for the first time since April 14th.

After retiring six of seven Rainier batters in the first two innings and allowing just one hit, Sampson gave up four hits, including a three-run home run by right fielder Jabari Blash, resulting in five runs in the third.

The onslaught continued in the fourth inning with another three-run homer and the Rainiers never looked back. Sampson picked up his fifth loss of the season dropping his ERA to 6.71.

Blash had terrific offensive night for Tacoma leading the team with three home runs on five at bats, scoring three runs and seven RBI’s.  Blash is batting .258 and leads the team in home runs, with 16, and in RBI’s with 53.

The one highlight for the Chihuahuas came in the fourth inning when third baseman Brooks Conrad made a diving stop of a furious ground ball hit down the third base line that resulted in a 5-4-3 double play to end the inning.

The Chihuahuas were looking for their second sweep of the season, after doing it once before against Sacramento a month ago.  They did win the series for the third time and are now 9-3 against the Rainiers on the season.

El Paso now has a 29-31 record and sits in second place of the Pacific Southern Division seven games behind leader Las Vegas.  The Chihuahuas will now head out on the road for a four game series in Reno starting on Thursday, before coming back home for an eight-game home stretch.

It will be the second visit the Chihuahuas make to Reno this season, where they won two and lost two back in early April.  The Aces are second in the Pacific Northern Division with a record of 34-24.