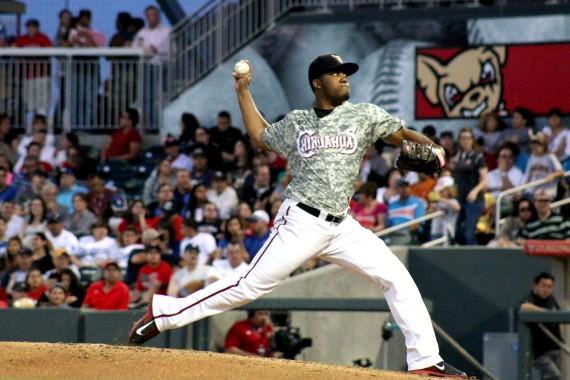 Game three of the Chihuahuas-Isotopes series was nothing short of an education by the Chihuahuas, as they dominated the Albuquerque Isotopes 10-2.

Starting pitcher Keyvius Sampson put the Chihuahuas in the drivers seat with five solid innings, only allowing two runs on one hit with seven strikeouts.  Sampson was rewarded with his second win of the season and now moves to 2-3.

Once the Chihuahuas regained the lead they never looked back as they outscored the Isotopes 6-0 in the next four innings.

In the seventh inning a scary moment happened when right fielder Jeff Francoeur was hit directly in the head by a pitch. Luckily Francoeur was able to get up after a few minutes and run the bases.

In the next inning Francoeur came to at-bat and singled to right field, the fans of El Paso gave the former MLB veteran a standing ovation as he reached first base.

By the eighth inning the Chihuahuas finished out the game in style by scoring five runs and increasing their lead to eight.

The Chihuahuas will now go for the series win tomorrow morning before they start their four game series with the Las Vegas 51’s. El Paso is now 17-21 and has won seven of their last ten games.

Javier Cortez may be reached at [email protected]om