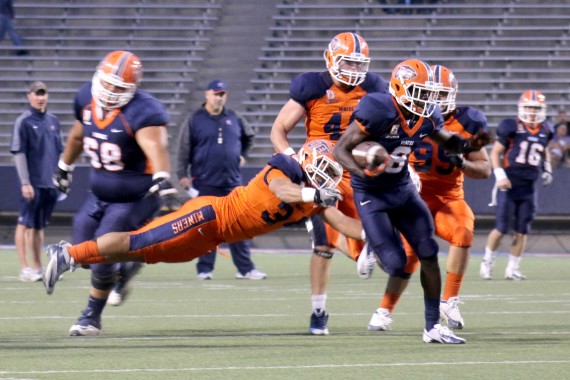 Sophomore running back Autrey Golden breaks a tackle from senior linebacker Anthony Puente during the Orange and Blue Game on April 11.

For some, the spring scrimmage is a teaser because it means football is back, For coaches, it’s an opportunity to evaluate players and go further into making their final roster moves. For players, it’s the joy of being able to put on the pads and start hitting each other.

Although every one playing is ultimately on the same team going for the same prize, there is some personal pride that players for the offense and defense take that makes for competitive gamesmanship among the players.

Projected starter at quarterback, Jameill Showers, got limited action in the scrimmage. He went four for seven for 44 yards.

In the one-on-one drills segment, brothers Alvin and Aaron Jones met up, with Aaron getting the better end of it against his linebacker brother.

“He caught me on that. I’ll give him that one,” Alvin Jones said.

Head coach Sean Kugler talked about what he likes in his linebacker.

“It looked like today, Alvin made some nice plays on defense,” Kugler said.

Last season, the UTEP defense was one of the worst in forcing turnovers, but that changed for the spring game. Junior cornerback Nick Gathrite had a 92-yard interception return and junior cornerback Adrian James recovered an end zone fumble and brought it back 100 yards for a score.

Defensive coordinator Scott Stoker has finally had the time to work with the defense, and Kugler said that he is pleased with the improvement he has seen.

“The entire spring, the defense has really taken a big step forward. They are making plays and playing with energy, but the thing I get excited about is they are causing turnovers and turning them into points,” Kugler said. “My hat goes off to the entire defense and coach Stoker and the entire staff.”

Offense wants to score and make the defense look bad, while the defense is concentrated on not allowing the offense to produce any results.

“I really enjoyed the effort tonight. Guys went out there and had fun and we had a very productive spring,” Kugler said.

A defense that gave up huge plays a year ago was making huge plays for itself at the scrimmage. They forced turnovers and were able to convert them into points.

The scrimmage was a mix of the first team and the second team members rotating plays.

The defense came up with six sacks that evening, and two of those were from sophomore Nick Usher.

“The pressure today was key,” Usher said. “We just had to come out here and do our thing and show what we can do and what we’ve been doing all spring.”

Sophomore linebacker Jimmy Musgrave made a lot of solid one-on-one tackles and pursued the ball well at the scrimmage, and the Miners can sure use him to stop the run. This is definitely where the team had plenty of issues last season.

“Jimmy Musgrave has been making plays all spring, he’ll be right there in the mix for the starting linebacker spot,” Kugler said. “He plays with a lot of energy.”

The majority of the snaps on offense were for sophomores Mack Leftwich and Garrett Simpson. Simpson tallied 104 yards passing on seven completions.

The Miners will resume practices Aug. 4 and will begin immediate preparation for their season opener against the New Mexico Lobos in Albuquerque on Aug. 30.