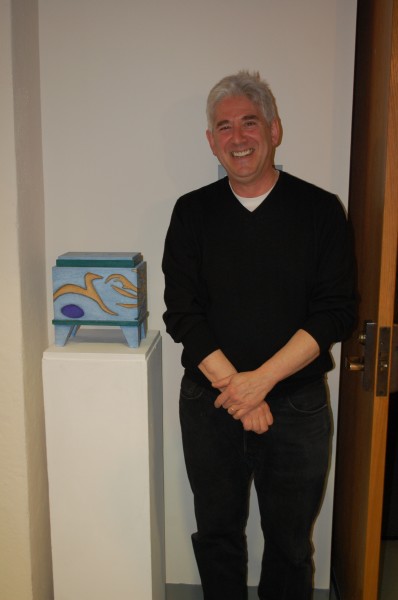 Tobi Kahn, a world-renowned conceptual artist–who both sculpts and paints, visited UTEP on March 31. The lecture took place at the Stanley and Gerald Rubin Center.

To keep things light, Kahn joked about a concern of losing his audience to the UTEP woman’s basketball team, which played against Washington at the same time of his lecture. However, students, faculty and community members showed up to hear him talk about his work.

“I had seen a flyer on the event and I was interested in checking it out,” said Jorge Lujan junior English and American literature major.“The work was aesthetically pleasing to the eye, but hearing Kahn tell us the stories behind each work gave them depth,” he said.

Kahn’s presentation was carefully calculated, while still maintaining its warm and spontaneous feeling as he explained where his inspiration came from for each piece.

Like an artist portrayed in a Hollywood film, he is eccentric in that inspiration comes from both the mundane moments of life as well as the more powerful. An example of this would be the contrast between his “Embodied Light” and his “Microcosmos” installations. The former of which is a set of conceptual art sculptures that try to embody a healing factor to life after the 9/11 event.

Kahn was thoughtful to bring samples of this installation and there is a great short video done by two documentarians of him explaining the pieces in the installation.

“I create work to be meditative and transformative, which allows the viewer to see their own experiences reflected in the work,” Kahn said.

He regularly invited the audience to give their interpretations of a piece in the slide show and articulate what they felt visually. Kahn was thrilled to hear the different responses, and he went to explain how he came up with the concept.

Kahn thereafter explained how he realizes everybody has the capacity to express emotion in different ways and that visual arts its his own way. However, in this way, he never told the audience what the art was, but how it merely came to be.

“Looking at his piece ‘Vyhti Variation’, I saw the river splitting our border cities, where by crossing to one end, you have the opportunity to reinvent yourself,” senior English and American Literature Blanca Campos said.

“Visual articulation is the difference between telling someone ‘I care about you’ and hugging them,” Kahn said. “They are the same message, it just depends on how you can communicate it best.”

In “Microcosmos”, Kahn paints a wonderful painting of a coffee stain on a napkin that his close friend to Mark Tykocinski had at first described as a splitting cell. After this, Kahn poured through medical books he borrowed from that same friend looking at life under a microscope. This is of course, the more mundane part of life that Kahn also likes to display in his work. The idea is that no matter the size, it is all big to somebody.

Kahn has had over 60 exhibitions in his lifetime including a pilgrimage spot for any art enthusiast, the Guggenheim back in 1985. At age six, he told his mother he would become an artist when he grew up. Something that definitely has a recurring role in his artwork is his Jewish heritage. One of his art pieces being, a sculpted menorah, but in the shape of a tulip. Kahn has wed the concept of the oil that lasted for eight days and the tulip, which can be replanted every spring so long as the bulb remains intact.

Kahn’s lecture was sponsored by the Inter-American, Jewish Studies Program, the English department is scheduling another event as part of the centennial on on May 1, where author Author Nathan Englander will be invited as a guest speaker.