Miners will host Rutgers in the WNIT Championship game on Saturday. 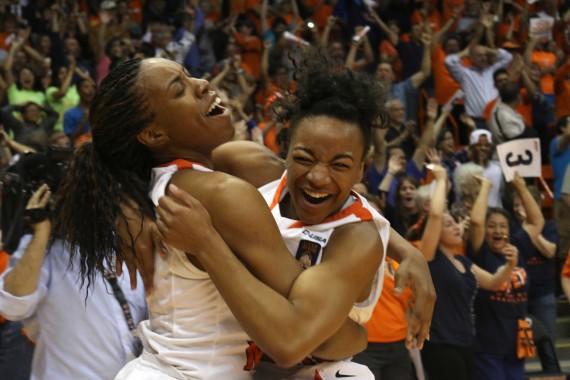 Nash would have been UTEP women’s basketball’s senior leader on the court in 2017, instead, she found herself in federal court.

Tonight the dream became a reality for UTEP head coach Keitha Adams and the women’s basketball team. Every last seat was packed in the Haskins Center, with 12,222 loud and boisterous El Pasoans, who saw the Miners defeat South Dakota State Jackrabbits 66-63.

It was another slow start for the Miners, the Jackrabbits set the pace as they led the Miners the whole first half. South Dakota State hit their first four 3-point shots. At one point they led the Miners by as many as nine, as the Miners shot their lowest shooting percentage of the tournament at 31 percent.

“We struggled in the first half offensively,” Adams said. “We have to credit South Dakota State on how hard they played. Overall though it was a great game.”

Despite the Miners low shooting percentage all game long, the Miners defense was up for the task. The Jackrabbits were held to 38 percent shooting in the second half and were forced into 21 turnovers as Adams implemented a half-court trap that slowed South Dakota State.

“We like to do that, maybe change the tone,” Adams said. “Our half-court trap kind of took them out of being able to run that. But they are really good at running their motion offense against man.”

Once again the Miners were led by seniors, center Kristine Vitola and forward Kayla Thornton. The two combined for 40 points, 20 rebounds, five blocks and seven steals. In crunch time Vitola and Thornton were the go-to players.

“That’s what we had to focus on,” Vitola said. “I told my team we can’t be shooting three-pointers all game long. We have to get a balance and go inside. I’m just trying to be there for my team, I am playing like it is my last game.”

The Miners now improve to 29-7 and will face Hall of Fame coach Vivian Stringer and the Rutgers Scarlet Knights in the women’s NIT championship game. The Miners will once again play host, the game starts at 1 p.m. on Saturday.

“We will definitely be ready,” Adams said. “Vivian Stringer is a Hall of Fame coach and once you get to this point you know you will be playing good teams. It was a great win and we have 40 more minutes in the Haskins”