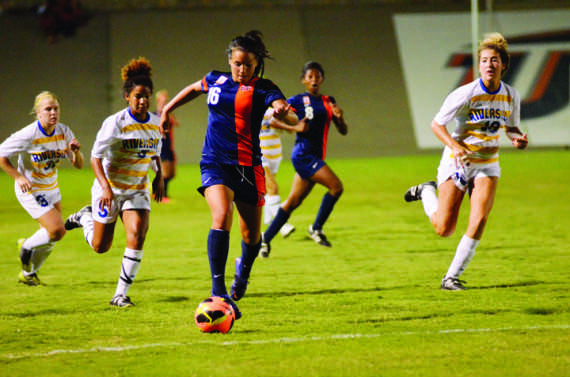 Freshman midfielder/forward Nicole Lindsay is one of the players receiving more playing time after the departure of five seniors.

The UTEP women’s soccer team returned to action as they opened their spring season at University Field on March 29 and faced the Arizona State Sun Devils.

This game was the first of six exhibition games the Miners will play this spring as they gear up for the 2014 season, which begins in late August.

“It’s great to be back out here, the field looks great, great weather and we even had a nice turnout for a spring game,” said head coach Kevin Cross. “It’s nice to come out here and play against a big-time team such as Arizona State.”

After two blocked shots from midfielder Nicole Lindsay, forward Angela Cuataia sent the rebound to the back of the net in the 27th to give the Miners a 1-0 victory over Arizona State. The Sun Devils finished seventh in the Pac-12 last season, while the Miners had a third-place finish in Conference USA.

Cutaia, along with Lindsay, began the game as the starters up front, replacing Babcock and Nicholson. Alexis Roberts covered for Soto, while Hannah Asuchak and Hannah Nicholson were the two back players instead of Linger and Martyn.

“That was one of the main things we wanted to see today, we wanted some players to step up,” Cross said. “The spring is the time where people develop the most and we saw a lot of positives today.”

This is the first game the Miners have played in almost five months, when they lost to East Carolina in the quarterfinals of the conference tournament.

Despite the long offseason, the team has kept working to keep themselves fit.

“We’ve put a lot of work into the fitness of the team, coach Leach was done a phenomenal job with them,” Cross said. “After Christmas, we worked on speed and strength and now on endurance.”

Cross also said that he was pleased with the overall effort and how the new players stepped up to the challenge, but of course there is still a lot of ground to cover and plenty of room for improvement.

“We need to keep possession more in the attacking third, and create more opportunities and communicate more, especially when they’re tired,” Cross said.

The squad will get two more opportunities this week to show the coaching staff they can give the team a boost as they host the Arizona Wildcats on April 12. They will then travel to Albuquerque, N.M., to take on the New Mexico Lobos the next day.

UTEP will close their spring season schedule with games against Eastern New Mexico and the New Mexico Highlands on April 19 and 20, respectively, along with the alumni game on April 26 at University Field.

“It was great to see them in action,” Cross said. “Having a soccer game is very different than running in practice and they did a great job.”