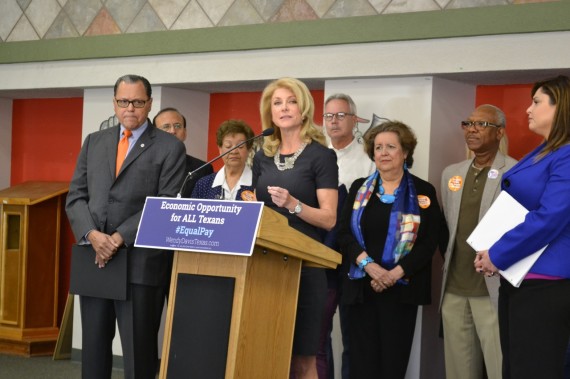 Sen. Wendy Davis, D-Fort Worth, speaks about economic inequality. To her right is El Paso Sen. Jose Rodriguez and to her lift is El Paso Rep. Marisa Marquez, both Democrats. Volunteers for the Davis campaign stand behind her.

“When he was first asked about it two weeks ago, he dodged the question,” Davis said in her speech. “He seemed to say that he supported the concept of equal pay, but I’ve never heard of a concept that could pay the rent or put food on the table or put gasoline in your truck.”

State statistics show that Hispanic women, earn even less: 45 cents for every dollar a man earns according to the Center for American Progress.

Davis believes current Texas laws do not protect women and minorities from inequality and said Abbott has not supported laws such as the federal Fair Pay Act of 2009 and the Texas Equal Pay bill.

“This is the very legislation that would help his employees address the fact that they’re getting paid less than co-workers for doing the same message,” Davis said.

In an interview after Davis’s speech, Marquez said this was an opportunity for El Pasoan’s to express concerns.

“It’s an opportunity for us to express ourselves as a community and say ‘these things are important to us and we’d like to see these types of changes in the governor’s office, in the state and to support those things,’” Marquez said.

Marquez said she and Davis came into the state Capitol the same year and have worked together on legislation having to do with women who were incarcerated and women’s health.

“We have a history with Wendy here on the borderland, working with her on issues and we want to continue to support her in her campaign for governor,” Marquez said.

Haight hopes to move policy makers to further economic development in El Paso. She is concerned with equal commerce and access for women.

“I talked to her (Davis) about women’s issues, how a single mom suffers when everything is shut down,” she said. “Social responsibility is not addressed as it should.”

Jasmine Aguilera and Maria Esquinca may be reached at [email protected]