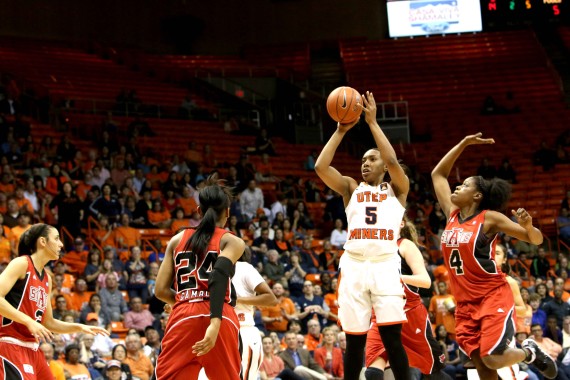 The UTEP women’s basketball team made their debut in the NIT asthey hosted the Sun Belt regular season champions the Arkansas State Red Wolves and came out ahead in the end 74-64.

Both teams were tied at the half but UTEP came out with a 15-4 run that kick started a series of steals, mostly by senior forward Kayla Thornton, that led to easy points.

Tonight Thornton could not be stopped, she finished 28 points, six rebounds, four assists and seven steals.

“When we lost our last game to Southern Miss it really got to me,” Thornton said. “For us to get another opportunity to play at home I had to take full advantage. I was so determined. I couldn’t do two losses back to back like that.”

Early on it was a close affair with seven lead changes and six ties. The second half would belong to the Miners. They led by as much as 16 points late in the second and never allowed the Red Wolves to put pressure on them.

Junior forward Chrishauna Parker had a double-double with 12 points and 11 rebounds. The tag-team of Thornton and Parker is what the rest of the team fed off of.

“When Kayla and ‘C.P.’ are like that it’s a pretty good tag-team,” said head coach Keitha Adams. “It was overall a really good win for us.”

In the second half the Miners changed their lineup and put on the court those players that were shooting well.

The Miners shot 48 percent from the field in the second half while the Red Wolves shot 33 percent.

UTEP will host another NIT game when they welcome Saint Mary’s who beat Cal State Bakersfield by a score of 75-68, Monday, March 24 at 7 p.m.

Luis Barrio may be reach at [email protected]