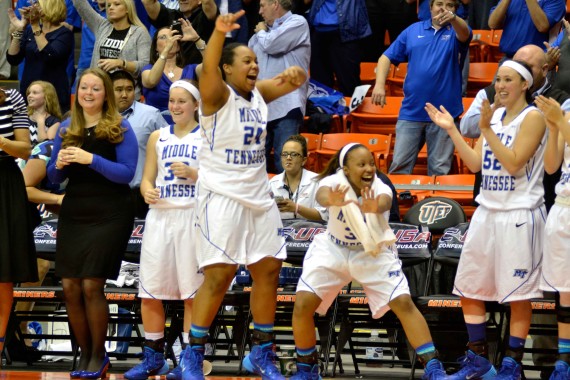 Southern Miss held Middle Tennessee scoreless for the first four minutes of the game, but for the next 36 minutes it was nothing but a dominant performance by the Blue Raiders as Middle Tennessee trounces the Golden Eagles 84-55 in the women’s Conference USA championship game.

Southern Miss was led by guard Jamierra Faulkner with 20 points and 10 assists. Southern Miss now falls to 26-6 with their chance of a NCAA tournament bid very unlikely, the Golden Eagles will most likely get a high seed in the women’s NIT.

Middle Tennessee found contributions from everyone. Five Blue Raiders were in double figures and as a team they shot 50 percent from the field and outrebounded Southern Miss 41-33. Forward Ebony Rowe took home all-tournament team honors, along with Conference USA’s tournament MVP.

The Blue Raiders now move to 29-4 and secure an automatic bid in the 2014 women’s NCAA basketball tournament. Middle Tennessee is projected to be seeded as high as seven, but might move even higher with their 29 point win over Southern Miss today.