Marshall holds on to early lead to upset Florida Atlantic 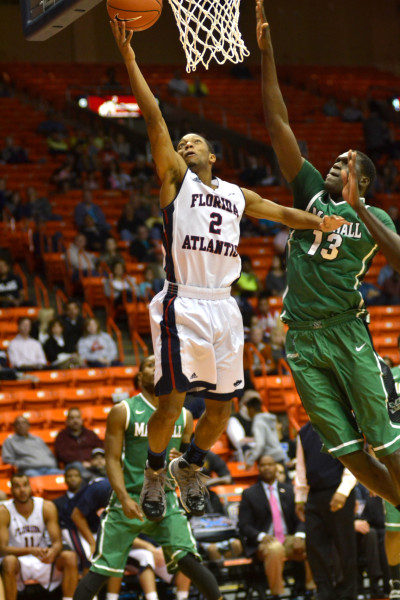 In the second game of the men’s tournament, the Marshall Thundering Herd defeated the Florida Atlantic Owls 63-59.

Marshall was led by sophomore guard Chris Thomas who scored 21 points and put the game out of reach for the Owls with two late free-throws.

Marshall forced 15 turnovers and cooled off the Owls who shot 37.5 percent from the field in the second half. Marshall led by as much as 17 points halfway through the first half.

Florida Atlantic made a costly traveling turnover with 33 seconds remaining in the game that resulted in Marshall making the contest a two-possession game.

For the Owls, two players score 20 plus points. Freshman guard Marquan Botley scored a game- high 26 points. This is the same player that broke UTEP’s heart earlier in the season with a go-ahead 3-pointer to win earlier in the year. Guard Pablo Bertone for the Owls scored 21 points.

Neither team had a marginal advantage on the boards and neither player from either team reached double-digit rebounds.

Marshall with the win advances and will play No. 6 seed Old Dominion in the second round on Wednesday at 2:30 p.m. The Thundering herd lost to Old Dominion on the road in the regular season by a score of 70-63.

Luis Barrio may be reached @Luis_Barrio17