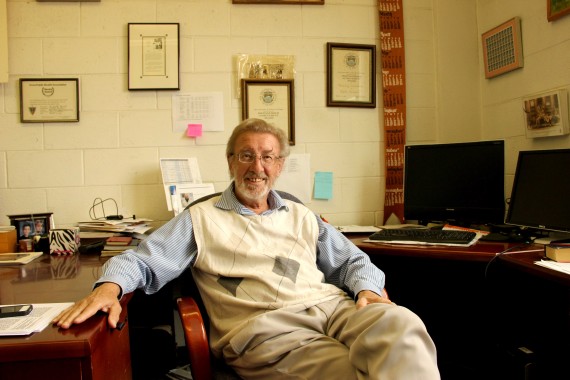 At 9 a.m. on a Tuesday morning, a piano trills through the stereo speakers. Sixteenth notes crescendo and fall, melting together with an English accent.

Every Tuesday and Thursday, listeners of the local NPR station KTEP can hear a four-minute long segment called “100 @ 100: Research for Our Next Century,” which features faculty members on campus in all departments who conduct their own research.

Started by Keith Pannell, chemistry professor, in January, “100 @ 100” focuses on research done campus-wide and gives light to various departments that conduct research, but that may not get recognized for it.

“I thought it was a good idea. I’ve been doing the ‘Science Studio’ program (on KTEP) for over 25 years. I’ve talked to hundreds and hundreds of scientists from biology, chemistry, math, physics, astronomy, astronauts—all sorts of people,” Pannell said. “That’s a half an hour program, it’s in-depth and you get to know the scientist. Most people in America don’t know much about science.”

Born in England, Pannell grew up listening to BBC radio. This is where his interest in radio began, thus fueling his passion to start the “Science Studio” at KTEP.

“Then it became clear that we were going to have a 100th birthday and I thought, ‘hell, why not branch out and cover research everywhere, not just in the sciences,’” he said. “I think, in general, people think that research is just science, while someone’s work in the art or music department is seen as a hobby and I completely disagree with that. Some of the brightest people on this campus have got nothing to do with science and engineering.”

Awareness toward diverse research led Pannell to choose 100 faculty members that he thought were the most interesting.

“There is something going on everywhere, so I wanted to highlight that,” Pannell said. “(The segments are) not very long, but it is enough to give the listener a flavor, a breath of the researcher and their part in this institution.”

Depending on the success and feedback for “100 @ 100,” the show may continue on past the centennial year.

“There are more than 100 faculty on campus and most are doing something creative in their field,” Pannell said. “It could develop into something more.”

Along with Pannell, Norma Martinez is the traffic director for KTEP studios and helps edit and splice the audio together, ultimately making the segment listenable for the audience.

“Just because science and engineering brings in the research money doesn’t mean it is the most important,” Pannell said. “They are important features of the institution, just like philosophy, English and art. If you focus on it, like this radio program does, then there might be someone out there who finds a particular research in the arts interesting. It may not get big money, but it could get local interest—people come up with new ideas and start sharing them and then it sort of just fertilizes itself after that.”