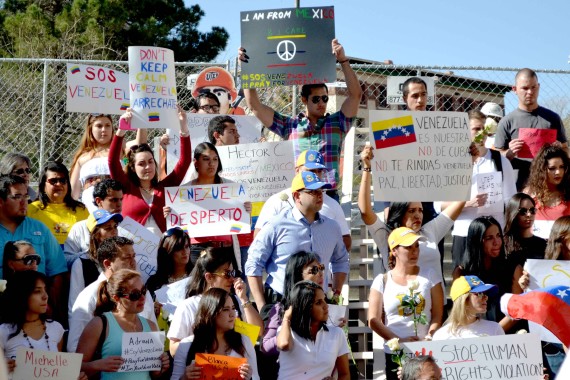 Angela Garcia left Venezuela for the U.S. three years ago. As a college student in her home country, she fought for freedom of speech and human rights, something she’s seeing slip away as violent protests continue to escalate.

“We feel for them from here seeing how our country goes up in flames,” she said. “They are using tear gas, explosives inside the homes…this is a nightmare. Their human rights are being violated. They are conducting criminal activities.”

Students began protesting for better security, freedom of expression and the lack of goods earlier this month in Venezuela. Three people were killed on Feb. 12.

Outside the Union Building, Thursday a group of about 50 Venezuelans and supporters gathered in protest of the social and economic inequality of the country and the misuse of weapons during the protests.

“We feel obliged to give our two-cents, even here in El Paso where we’re very far away and not a very large city,” Garcia said. “But we owe it to our people in Venezuela to tell them ‘yes, we are here.’”

Pedro Garcia, a junior political science major, helped organize the demonstration. He wanted to put together a large group to show their support for the people of Venezuela.

“We are here, united, wanting to give Venezuela a voice because right now in Venezuela they’ve restricted access to the media,” Pedro Garcia said. “They don’t have any other way of expressing themselves.”

Angela Garcia said that being an outsider looking in doesn’t calm the hurt. She said that those who leave the country are labeled as traitors, but that she was only looking for a better future elsewhere. Youth are being pushed out of Venezuela, she said.

“It still hurts,” she said. “Being here doesn’t exclude us from wanting to go back to Venezuela to find our families safe and sound, to be able to find the basic goods to be able to live without having to make a huge line.”

Miguel Angel Garcia, a protestor and director of process improvement at Northstar Recycling, said Venezuelans are a good people and deserve the respect and attention of the international community. He called upon the U.S. to take a stance on the matter.

“We’re here simply to say that we’re here. We’re not touching Venezuelan ground for whatever reason, but we’re here,” Miguel Angel Garcia, who has lived in the U.S. for about 25 years, said.

The group is planning a larger demonstration Saturday at Noon on Shadow Mountain and Sunlandpark Drive in El Paso and at the Equis statute in Ciudad Juárez.

Andrés Rodríguez may be reached at [email protected]