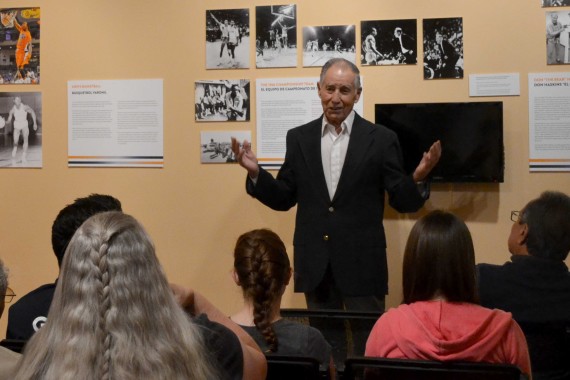 Ray Sanchez talks about how much El Paso sports has impacted his life.

The UTEP Centennial Museum and Welcome Center hosted a book signing for Ray Sanchez Thursday afternoon. The longtime El Paso sports writer came out with his seventh book last year called, “The Good, the Bad and the Funny of El Paso Sports History.”

The exhibit was done in conjunction with Miner Strong: A Century of Sports at UTEP. The exhibit displays historic pictures of the 1966 NCAA basketball national champions Texas Western, the long list of UTEP track and field All-Americans and more.

The exhibition gives a feel for what Sanchez’s book is about, and in his opinion, was by far his favorite to write.

“To go back and relive all the great moments in El Paso sports history were great,” he said. “Sports has been popular all around the country, but sports were always popular in El Paso right from the start.”

Once the audience concluded with viewing the exhibition, consisting of pictures, memorabilia and video, Sanchez gave a brief synopsis of his journey.

Throughout his long career Sanchez has had experiences with athletes ranging from many sports, including his close relationship with Hall of Fame UTEP Head Coach Don Haskins and Hall of Fame baseball player Willie Mays.

Sanchez was a consultant during the painstaking film making of “Glory Road,” a movie that passed through many deals with several film studios for over 20 years.

“(Don) Haskins was fed up,” Sanchez said. “He had been burned by Warner Brothers, and he did not want to do it. I begged him I pleaded with him, and I nearly got down on my knees. I finally convinced him, and the rest was history.”

Before concluding to sign autographs for his new book, Sanchez offered advice for aspiring writers that he has used over his 60-year career.

“If you ever want to write a book about anything just start,” Sanchez said. “Write a page, just start. You will be surprised by how much you can write. Just getting started is the hardest thing­.”

Sanchez’s book is on sale, and can be found on amazon.com for $16.95. For any of Sanchez’s past columns or writing you can find them on his website  raysanchezbooks.com.