The most loyal and dedicated Miners fan 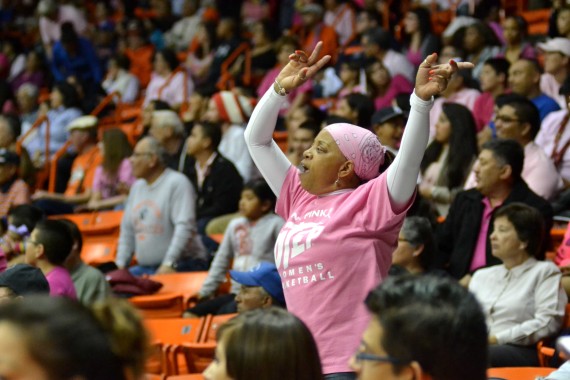 Patricia Flores known as Miss Pat has been attending UTEP games since the late 1980s.

Florida International’s women’s basketball team is being introduced in the starting lineups. As the PA announcer calls out each player’s name, everyone in the surrounding sections knows what follows.

“Who?!” is what longtime UTEP fan Patricia Flores, or Miss Pat as fans, coaches and players know her, says with fervent fire when an opposing player is introduced.

During the women’s games, she is stationed right behind the Miners’ bench and although they’ve heard it many times, the Miners grin as she humorously heckles the visiting team.

UTEP is trying to score on the offensive end and they draw a personal foul. This causes Miss Pat to shout, “You! You! You! You!” to reaffirm to the opposing players that they did indeed committed a foul.

Miss Pat and her husband have seen the Miners play since the 1980s.

“I think just the team enthusiasm, even from years past up to now, they just fight and keep clawing,” Miss Pat said. “I love going to the games and acting crazy. That’s the best thing going in El Paso.”

It was about seven years ago when Miss Pat started attending every women’s basketball home game.

Her unmatched enthusiasm has garnered her questions such as, “which player is your daughter?” She always replies that she doesn’t have a daughter on the team.

When the Miners play away from the Don Haskins Center, Miss Pat will go on the road and cheer on the Miners if the opportunity presents itself.

One night after a road game victory, Miss Pat got a call in her hotel room from one of head coach Keitha Adams’ assistant coaches. She said she was told on the phone: “You are the number one fan, keep it going. You support our team, keep it going.”

“The thing that we love about her is that she’s there always supporting us,” Adams said. “She always has our back and we love that. Her passion is very real and her energy is really good. We just need more fans like Miss Pat.”

Earlier in the season, the men’s basketball team traveled to the Bahamas for the Battle 4 Atlantis tournament. Perennial powerhouse schools such as the Kansas Jayhawks and Tennessee Volunteers had their legion of followers at the game. The Miners had a small, but loud following, and Miss Pat was right there cheering and supporting the Miners. Even the Knoxville New Sentinel wrote a story about her after UTEP played Tennessee on Thanksgiving.

Perhaps the one thing bigger than her passion for Miner athletics is her gracious heart.

On several occasions, she has invited over and had the men’s and women’s basketball teams over to her home, where she grills burgers and hot dogs and gives the players a home away from home feeling.

“They’re really nice kids,” Miss Pat said. “It’s nice to be able to do something like that for them because you want them to feel like they’re part of a family. You don’t want them to be here away from home and they have nobody.”

It is a tradition for the UTEP home crowd to stand at the beginning of the first half and the second half until the visiting team has scored its first field goal. As soon as the shot goes in, the sea of orange fans seat themselves into their chairs and proceed to watch the game.

The only ones that remain standing are the security staff, Paydirt Pete, the head coaches and Miss Pat. She stands the whole game until the final buzzer. Even the cheerleaders get to take a break and sit down once in a while. Even with a couple of bad knees and a bad hip, Miss Pat said she sees this as no legitimate excuse not to cheer on the Miners.

Not only does she try to give a boost to the players, but she also urges the students to be as loud as she is and said there is no excuse for not jumping and screaming for 40 minutes.

Like a caring mother, who will provide support through thick and thin, Miss Pat tells her husband all the time that she believes the players are so talented that they can win every game. “I truly believe it,” she said.

This is why people like Miss Pat and take time to let her know that her spirit is a treat to watch. Her affable character blends with a relentless commitment to give the Miners every edge she can as a fan is something to respect.

“I’ll be going to the games as long as God says I can,” Miss Pat said.