"We better be ready to get results on the road and this two games are crucial for us." - Keitha Adams, head coach. 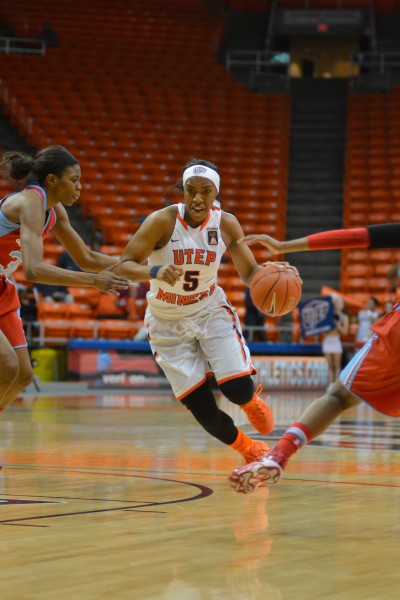 UTEP women’s basketball team has won the last six games and will seek to make it eight.

After a successful sixth-straight win on Feb. 8, the UTEP women’s basketball team is on the road again to face the Old Dominion Monarchs and the North Texas Mean Green Eagles on Feb. 15 and Feb. 19, respectively.

At this point in time, the Miners find themselves playing some of their best basketball. In the game on Feb. 8, Florida International came in with the nation’s leading scorer Jerica Coley. Not only did the Miners successfully tame the Golden Panthers, 83-62, but they also held Coley to a mere 10 points.

“That was probably one of the best defensive outings we’ve had,” said head coach Keitha Adams. “I’m very proud of our team, it was a great team win.”

This last Miners’ win happened in front of the eighth-largest crowd in UTEP women’s basketball history at 5,102 fans. With two road wins, the Miners might make history when they return home against East Carolina on Feb. 22.

“It was great. I’m very proud of El Paso. I really appreciate that we had such a great crowd. It was the largest crowd we’ve had all year,” Adams said. “We just need to have that kind of crowd and even a bigger crowd. It just needs to grow.”

In order for the Miners’ attendance to grow, they first must take care of Old Dominion. Coming into their game with UTEP, the Lady Monarchs’ record stands at 11-13 and 4-6 in conference play. Although the Monarchs come into the game with an unflattering record, they do pose a threat. At the end of January, the Monarchs narrowly lost to East Carolina, 63-64. East Carolina has the best overall record in Conference USA at 20-3.

The Monarchs are led by junior forward Shae Kelley, who is the only Old Dominion player averaging double figures, she averages 16.8 points per game, along with 10.3 rebounds.

The Monarchs however could pose a threat with their 3-point shooting, as four different players lead the team from shots beyond the arc–junior forward Tiffany Minor, sophomore guard Galaisha Goodhope and senior guards Stephanie Gardner and Michelle Brandao.

Next up after ODU for the Miners is North Texas. The Eagles find themselves in a similar situation at 10-13 and 4-6 in conference play. On six occasions this season the Eagles have lost by five points or fewer. The Miners will be favorites heading into Denton, Texas, but a close game is not out of the question.

Despite the Miners’ impressive 19-4 record, they find themselves in a very close race for the Conference USA regular season title. They are currently in a three-way tie for second place with East Carolina and Tulane at 8-2. Ahead of the Miners is nationally ranked Middle Tennessee State.

Another conference loss could put an end to the Miners’ chances to win the Conference USA regular season title. The most likely scenario will be that the Miners will win both road games and find themselves in a highly touted match-up against East Carolina a week and a half from now.

A possible win over the Pirates at home would garner some national recognition for the Miners, which is important going into this year’s Conference USA tournament. The most likely of scenarios is that the Miners will likely split the Conference USA regular season title with Middle Tennessee State.

Two things must happen though.The Miners need to win all of their remaining games especially against East Carolina and they need the Pirates to beat beat Middle Tennessee State when the play them two weeks from now. Nevertheless, the rest of the Miners season starts this Saturday when they head to Norfolk, Va., to face the Monarchs.

“We only have two more home games in our schedule,” Adams said. “We better be ready to get results on the road and these two games are crucial for us.”