How to avoid the flu this season 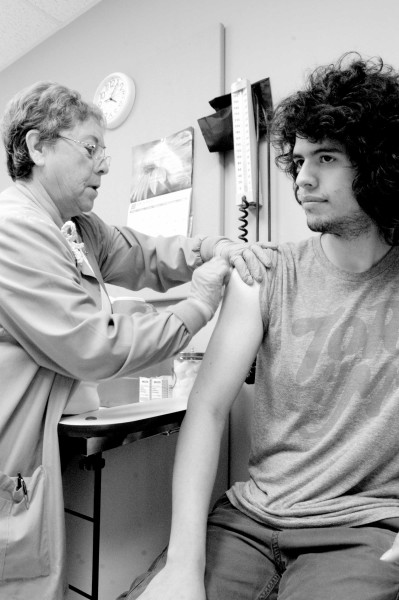 A student receieves the flu vaccine that was offered on campus for free in February.

The H1N1 virus is back this year and has already claimed the lives of four El Pasoans, including one UTEP student.

The Center of Disease Control and prevention, urges people 6 months and older to get a yearly vaccine.

With the recent passing of 22-year-old Rene Delgado, a UTEP studio arts major and Cinemark employee, it is clear that this strain affects children, young adults and the elderly just the same.

Delgado was sent to the hospital on Jan. 11 and passed away Jan. 14. There were no underlying medical conditions at the time of his death. His friends declined an opportunity to speak about him.

In October, Walgreens came to the university to provide free vaccines to students, faculty and staff. The Immunize El Paso campaign started by the El Paso Department of Public Health also provided free vaccines to people 18 years or younger and $10 for adults over 18.

Their efforts were meant to stop a sharp incline of flu-related hospitalizations and deaths at the peak of flu season in February.

The CDC website states that even though the H1N1 strain of the flu is currently prominent, it isn’t the only one. Even though getting the vaccine doesn’t assure your health completely, it will drastically reduce the damage that may be caused by the flu.