‘Dead Ahead,’ a virtual zombie apocalpyse 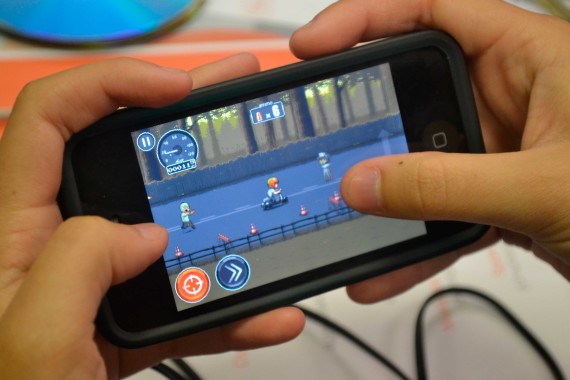 “Dead Ahead” is available on iTunes and the Play store at no charge.

There are plenty of games out there for your phones or tablets. Naturally, as great as they all are, they eventually reach an expiration date, where we all simply get bored of them. So if you have exhausted your recent time killer over the winter break, then maybe you should consider “Dead Ahead.”

“Dead Ahead” is a runner game, where as a young man or woman you ride your motorcycle through an apocalyptic wasteland filled with zombies trying to eat you. Equipped with a weapon, at times you can turn around and fire back at the zombies closing in on you. If you run low on bullets, your weapon will reload momentarily, in the meantime speed up to get away, but watch out for road blocks, abandoned cars or ramps that send you flying.

The graphics are minimal and reminiscent of arcade games, but enough to give crisp details that allow the game to suck you in. As the game goes on, you can buy new weapons and bikes with either real money or game money that you earn after each game session. Because everybody is different, upgrades in both bikes and weapons change drastically. The game offers fast bikes, but they are easily stopped by any object in its way and bulkier bikes aren’t quick with speed, but get good momentum going while mowing through zombies that might get in your way. Weapons are similar. If you like explosive weapons get a grenade launcher, which has limited ammo or you can get a machine gun that gets plenty of ammo with minimal damage.

As you progress, the challenges get harder, leaving you doing the same level for days at a time. There are also four different scenarios, which provide more obstacles to weave around, but the money you earn also goes up drastically.

With challenges that regularly get harder, bosses and an opportunity to upgrade and change the color of your bike, this game is worth the download. Even more so, it will be great for when you’re  waiting in line, sitting at home, or a few minutes before classes begin.