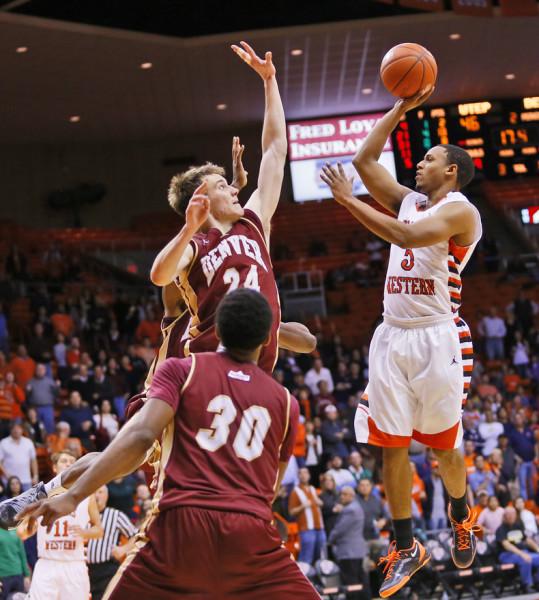 “Obviously were happy to get the win,” said head Coach Tim Floyd. “We played a very disciplined basketball team, they didn’t get outside of themselves when we got up. That’s something our team can learn from their poise offensively.”

The Miners had control of the game right from tip off, even holding a 14 point lead over the Pioneers at one point in the first half. The Pioneers got back into the game with the three point shot,after making one of 11 in the first half, Denver made four out of nine in the second half.

After a missed jumper by junior guard C.J. Cooper at the end of regulation and Julian Washburn missed potential game-winning jumper in the first overtime, it was “third time’s a charm” for the Miners in the second overtime. After having missed all six previous attempts for three Cooper made that dagger three pointer to give the Miners the win.

John Bohannon collected his second double-double of the tournament with 17 points and 15 rebounds, Cedrick Lang and C.J. Cooper both contributed with double digit scoring.

“He was just terrific and we told him that in the locker room. He had a real struggle offensively tonight, but Julian did not get affected by his lack of offense,” Floyd said. “He guarded his guy, whoever we put him on he just shuts that guy down.”

The Miners two wins in the Sun Bowl Invitational might not be against elite teams, but the poise and calm that the Miners have shown in two highly contested games is pivotal.

“I rather be a team that shoots 30 percent and wins, than team shooting 50 percent and getting beat,” Floyd said. “At least were getting some belief system, and learning how to win games.”

The Miners have now won five straight games, as they move to 10-5 this season. The Miners have an exhibition game against Angelo State on Jan. 4, before starting their Conference USA schedule againstCharlotte on Jan. 9.