"I wish I would have never taken Adderall, just because I didn’t know what it was to be on it." - Lydia Carranco, senior clinical laboratory science major 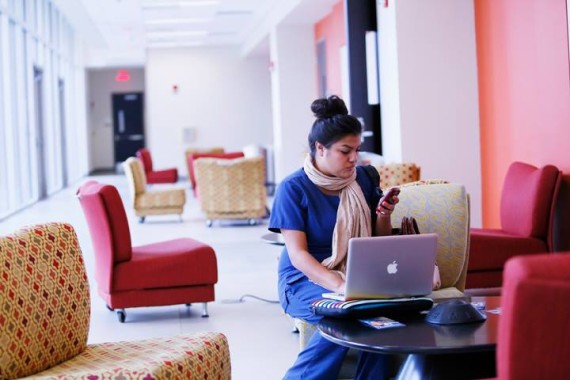 Lydia Carranco, a senior clinical laboratory science major, was diagnosed with attention deficit hyperactivity disorder during the transition from her senior year in high school to her freshman year in college.

Editor’s note: This is part two of a three part series examining student abuse of prescription drugs, Adderall and Ritalin.

Lydia Carranco has had a difficult time focusing in school since she was a child.

Carranco, a senior clinical laboratory science major, was diagnosed with attention deficit hyperactivity disorder during the transition from her senior year in high school to her freshman year in college. After seeing a psychiatrist, Carranco was given a prescription for Adderall, a prescription stimulant, and she began taking it.

In May, Carranco decided to stop taking the drug. She wanted to see if she could go on without the medication while keeping an academic performance of straight A’s, which she said began as soon as she was on Adderall.

“This semester I’m not on (Adderall) and I get really, really bad anxiety. It just feels like it’s in my bones, it’s horrible,” Carranco said. “I get so anxious with class and the stress. I’m having a really hard time dealing with it.”

Carranco is one of many who have legally obtained the prescription medication, but an increased abuse of pharmaceuticals is concerning drug enforcement officials.

“Prescription drug abuse, unfortunately, is on the rise,” said Diana Apodaca, spokeswoman for the Drug Enforcement Administration in El Paso. “It’s been categorized by the (Centers for Disease Control) as an epidemic.”

Painkillers like Vicodin (hydrocodone) and oxycodone are opioid based and fall in the same category as heroin. Prescription drugs such as Ritalin and Adderall are stimulants that can lead to cardiac issues and paranoia. They fall in the same category as cocaine and Ecstasy. Depressants are medications such as Valium and Xanax, which depress the central nervous system and reduce stress, anxiety and fear. All can have deadly side effects.

“The most common methods of trying to get prescription drugs that are not prescribed to you are either by altering or forging a prescription, or by doctor shopping—which means you go to several doctors to get the same prescription,” Apodaca said.

She also said that the DEA arrested about 30 people a month-and-a-half ago for getting a prescription by fraud.

“Especially with Adderall, they’re usually diverted from a legitimate prescription,” Apodaca said. “In other words, somebody was written a prescription for Adderall and instead of taking their medication, they sell it.”

Carranco received a warning from her internal medicine doctor about a conflict to taking Adderall.

“He told me, ‘you need to be careful because this goes on your medical record and if you ever want to get a job with the FBI, they go back on that,’” Carranco said. “So I was really thinking about it, but I really needed it, especially being in college.”

Adderall will more than likely affect anyone trying to get into medical, law enforcement and teaching professions, Apodaca said.

Prior to taking the medication, Carranco said she couldn’t keep her attention and focus on school, but she did not know that life could be different.

“It helped a lot and made a really big difference,” she said. “I really did like it, the only thing is that when you take Adderall you have to take it first thing in the morning. It keeps you up, it gets you wired.”

Carranco has stopped seeing her psychiatrist, but she is considering getting back on Adderall or Xanax.

She said her body has grown dependent on the medication and is possibly going through some sort of withdrawal.

“I wish I would have never taken Adderall, just because I didn’t know what it was to be on it,” Carranco said. “When I was on it, it was great. It was easier to pay attention and get everything done.”