"Anyone that met him can agree that he had a profound love for life and was truly enjoying his stay here." - Oscar Banuelos, senior electrical engineering major 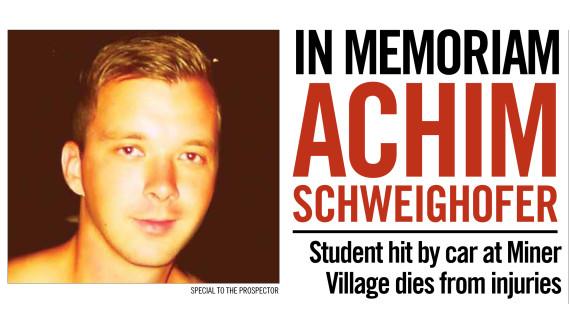 From attending school at UTEP to experiencing the culture on the border, Achim Schweighofer, 23, of Austria was enjoying his stay in El Paso, Texas.

On Nov. 15, Schweighofer was walking through the Miner Village parking lot when a vehicle driven by another UTEP student hit him, UTEP officials said. He was transported by ambulance and taken to University Medical Center.

Schweighofer was pronounced dead on Nov. 16, but his body remained on life support after his family decided to donate his vital organs, said UTEP officials.

The driver of the vehicle can face a manslaughter charge which is a sentence of between two and 20 years in a state prison and/or a fine of no more than $10,000 according to Penale Code, Title 5, Chapter 19.

UTEP police have not filed an incident report. The accident is still under investigation and no further details were available as of Nov. 18.

“Achim had a passion that I had never seen before in anyone else,” said Amaris Castañon, cellular and molecular biochemistry major. “He was incredibly comprehensible and had a loving heart. He was inspired by insightful events and amazing people.”

Castañon, Achim’s girlfriend, said she had a last moment with him on the night of Nov. 17.

“I was holding his hands the whole time and he shed a tear from his left eye. The nurses had told me he had not shed tears until yesterday,” Castañon said. “I felt his pulse accelerate even more when I played a video that his friends from Austria asked me to play for him and he continued to cry. I wiped his tears about four times.”

An official at the El Paso Medical Examiner’s office confirmed on Nov. 18 that Schweighofer’s body was in the morgue.

An international programs coordinator had put Schweighofer and Castañon in touch with each other since she had studied abroad at Graz University of Technology in Austria a year before Schweighofer came to UTEP.

After constant communication from April through July, Schweighofer finally came to El Paso in August to study at UTEP.

“When he arrived, I picked him up from Miner Village and took him for some yogurt and to the mall, where we conversed about Graz and the cultural differences that we both experienced,” Castañon said. “We then realized, through our conversations, that we lived two streets apart in Graz. Perhaps we had met each other before.”

Achim was working on a master’s degree in computer engineering—taking classes in both the electrical engineering and computer science departments.

He planned to stay at UTEP for a year before returning to his home university to finish.

“As all his professors could be able to testify, he proved to be an incredible student, always eager to learn,” said Oscar Banuelos, senior electrical engineering major. “He constantly expressed the fascination and interest he had in his classes and how much he was learning.”

Schweighofer never showed any symptoms of culture shock. He was quick to acclimate and always demonstrated the eagerness and willingness to learn and adapt, Banuelos said.

After Schweighofer’s fluency in English improved, he began to express interest in learning Spanish and was working toward that goal, Banuelos said.

He also said Schweighofer discovered his love for cooking while staying in El Paso.

“He never had cooked before,” Banuelos said. “But as always, his predisposition for success led him to become an amazing cook in a very short amount of time.”

“Anyone that met him can agree that he had a profound love for life and was truly enjoying his stay here,” Banuelos said.