"You have to love what you do, and making bread is an art and you have to take pride in it." - Juan Marquez, The Bowie Bakery owner 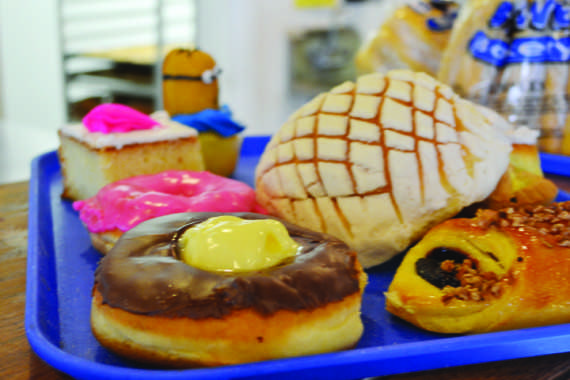 The Bowie Bakery was established in 1951 and continues to be students favorite bakery according to the Pick Awards survey.

Bowie Bakery has been active since 1971 and was recently voted as the best bakery in El Paso by UTEP students.

Juan Marquez, current owner of the Bowie Bakery, continues the family tradition and said that he is very fortunate to have inherited his parents’ bakery of Mexican “pan dulce” (sweet bread), cakes and more.

“I became owner of the bakery when my parents passed away in 2005 and 2012, and I think I’m fortunate because this is where I have been all my life and I am proud,” Marquez said.

Bowie Bakery was originally established in 1951 in El Paso’s Segundo Barrio, and was later sold to the original owners Angel and Maria Marquez. His son said his father began baking bread at the age of 13 in Mexico and later moved to El Paso and continued to work at his art.

“I was raised in California, but in 1971 we moved back to El Paso, where I learned everything about a bakery,” Marquez said. “The bakery used to be a house, with only one oven and one mixer. We basically started from the bottom.”

According to Marquez, the Bowie Bakery we know today was formed thanks to the hard work of the people behind it. It is still not an easy job.

“Back then we used to always wake up really early in the morning, take the bus and come to the bakery to make the bread every day,” Marquez said. “And since we closed at 10 p.m., we sometimes couldn’t catch the bus back home. At times like this, we used to stay at the bakery and sleep on cardboard and blankets and the next day my father would wake up really early to have the bread ready at 6 a.m.”

Bowie Bakery also sells different types of food such as menudo and tamales on Saturdays and Sundays.

Marquez said that for him, making bread is a form of art that he is proud of and has helped the business grow.

“You have to love what you do and making bread is an art and you have to take pride in it,” Marquez said. “We are grateful for those who support us and we strive to keep the quality of our pastries and we would like to invite all of the UTEP students who haven’t visited us to try our always fresh products.”

Bowie Bakery remains at its original location at 901 S. Park and have an additional location on Doniphan and Mesa. According to Marquez, Bowie Bakery is trying to expand further.

“It is always on my mind to try and expand the business. I’ve been trying to open a bakery on the Eastside, but it is not always easy,” Marquez said.

Alberto and Octavio Macias, brothers and both sophomore music majors, said that Bowie Bakery is one of the best bakeries in El Paso.

“I remember that our mother used to tell us about how our great-grandmother used to buy bread from there and give us some,” Octavio said.

Although they have never been to the store itself, they said that they have enjoyed their bread and said that it is hard to find good “pan dulce” here in El Paso.

“We come from Juárez and it is not hard at all to find some good bread over there, but here in El Paso is a whole other story,” Alberto said. “I especially enjoy this bread because it is always fresh.”

Leonardo Montañez may be reached at [email protected]