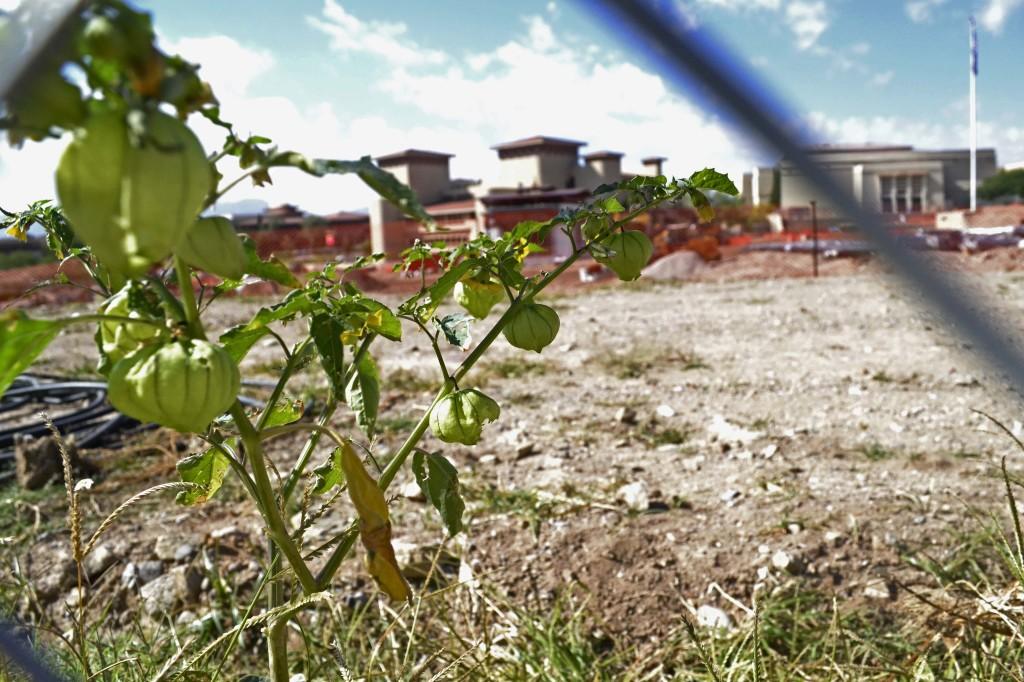 Tomatillos growing in front of the UTEP Dinner Theatre.

As an effect of the ongoing construction at UTEP—that will contribute to the Centennial Celebration in 2014—new and exciting projects are unfolding.

There is one occurrence that is out of the ordinary, and this is the sudden growth of what appears to be a garden, that is producing fruits such as watermelons, tomatillos and melons.

According to Beverly Kerbs-Ward, UTEP Dinner Theatre program coordinator, she began to see this vegetation growing about a month ago.

“I started noticing this plant, which started growing tremendously that reached over all the bushes right outside the dinner theatre,” Kerbs-Ward said. “My parents had a ranch when I was little, so that’s why I was familiar with the appearance of what was beginning to grow.”

Despite no one really knowing what triggered these plants to grow in a secluded area, and whether it’s safe or worth having this garden at UTEP, it is likely that these plants will be cut down. However, the news has spread and students have shared their opinions on this matter.

“I think this is really cool and out of the ordinary,” said Gina Cortez, senior psychology major. “I mean it shouldn’t be a surprise though, we see very strange things happening at UTEP, we have cats roaming around and different departments feed them, they have just become part of the UTEP environment.”

Cortez said that there might be other alternatives than removing this vegetation.

“Maybe it should be moved to a different spot, where it would be more easily accessible and environmental friendly, but still located here at UTEP,” Cortez said.

According to Cortez, having a garden would make UTEP much more special, taking into consideration that many universities have also come into terms with this idea and have started community gardens.

Raul Armendariz, junior environmental science and president of the Permaculture Society said it would be a real shame to see something like this garden cut down.

“As the university moves toward its centennial celebration, and the sustainability movement continues to move forward, the Permaculture Society is also making a goal to creating these permaculture gardens that act as a prime example of sustainability on campus,” Armendariz said.

Armendariz also said that the Permaculture Society is willing to take on this project and be advisors in order to expand the garden.

“We have already shown this with our work last spring and summer by creating the first UTEP herb and vegetable garden that is located at Ocotillo Hall at Miner Heights Dormitory,” Armendariz said. “If the issue of removing this vegetation is that it is not aesthetically pleasing or demanding to maintain, then Permaculture Society will gladly provide our time and resources to take this as our own project. That is our philanthropy and mission as a student organization here on campus.”

The Student Government Association have been supporters of the Go Green Campaign, and as a result they have developed a Green Fund, which has promoted renewable energy, environmental sustainability on campus and in the community, increasing energy efficiency and conserving water and other resources. The Green Fund is student fee that adds $3 to their total tuition, and has raised approximately $40,000 per year for campus sustainability projects.

Pamela Isita, Green Fund committee chair and health sciences SGA senator, said that SGA is more than interested in doing some extensive research on the development of this garden, however, they need input from students and faculty ––either opposing or supporting–– to be heard first.

“We will wait for the responses of the students, since SGA serves the students of UTEP. Until then, we have no input for the future project of the garden,” Isita said.

The mystery on how this garden started growing is still unanswered; however, students need to let their voices be heard about this latest discovery.

So leave your comments below or at our Facebook page at facebook.com/UTEPProspector. Let us know what you think.

Andrea Acosta may be reached at [email protected]