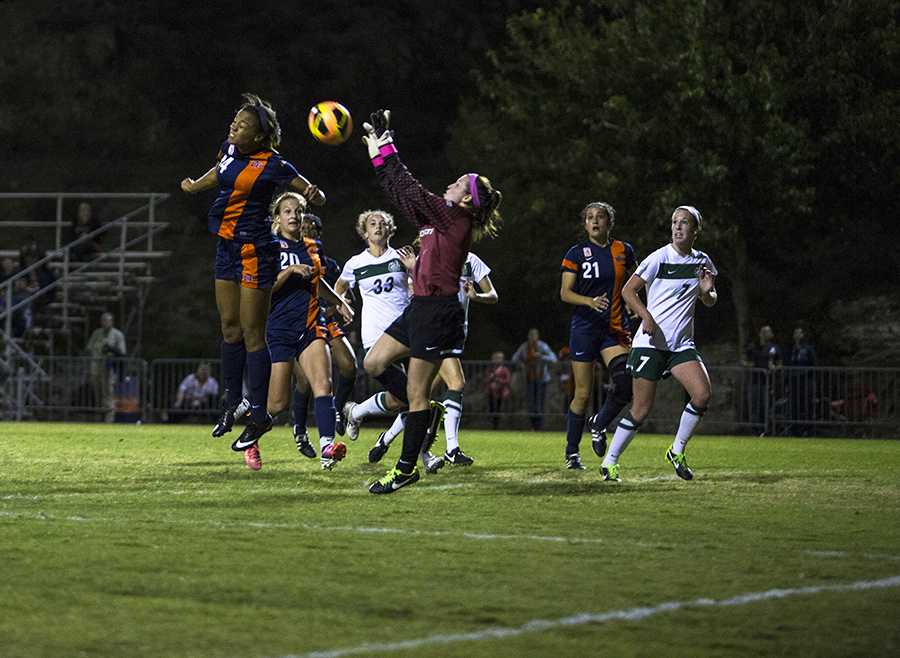 With two back-to-back goals from defender Dakota Olson, the Charlotte 49ers rallied back from a two-goal deficit to tie 2-2 with the Miners.

“UTEP jumped at us and we were a little bit shocked defensively,” said Charlotte head coach John Cullen. “I was very proud of our girls in the second half and they came back with two great goals,  but most importantly the way the girls raised the level when it was needed.”

The game was a tale of two halves and, as usual, the Miners were able to push back the 49ers and take control of the game.

In the 20th minute, UTEP senior defender Kenah Linger took a free kick from long-range, the ball flew across into the box and was deflected by a defender and found its way to the back of the net to put the Miners on top 1-0.

The Miners pushed forward and in the 34th minute senior forward Azia Nicholson found space on the left and tried to serve the ball to the middle looking for a teammate. Instead, Charlotte defender Nicole Anderson slid to intentionally break the pass, but her effort pushed the ball into the back of her own net to give UTEP a 2-0 lead at the half.

“Sometimes you get those lucky bounces that go your way,” Nicholson said. “Coach keeps telling us that if we keep attacking, good things will happen for us, whether its our own goal or a rebound.”

Charlotte–who has lost three of its forwards in the past two weeks due to ACL injuries–were forced to habilitate Olson who is a defender as a forward, the decision proved to be a crucial one.

In the 54th minute, senior midfielder Brooke Mulloy served a long ball to Olson who took a shot to the far post. The ball sailed over Dilling and into the net.

Just three minutes later Olson scored again off a kick from the left corner of the box. Her goal tied the game at 2-2.

“We can’t allow back-to-back goals, we need to play strong all 90 minutes,” said UTEP head coach Kevin Cross. “Our team has a lot of character and they are going to respond well as they always do.”

In the 79th minute Charlotte had a great opportunity to win the game as junior forward Sarah Trexler got Dilling off the goal, but was left with a very tight angle and her shot went wide. For the fourth-consecutive game the Miners would have to go to overtime.

UTEP retook control of the play but the best chance came in the 95th minute when Freshman Brianna Barreiro’s header was saved by Alex Weaver.

In the second overtime, the 49ers on the counter had freshman forward Perri Bonner one-on-one but Dilling came to block her shot.  One minute later, Olson took a shot that was going to the corner of the goal but Dilling dived to send the ball over the crossbar and help the Miners avoid defeat.

“I’m just doing my job, I try to do my best every game,” Dilling said. “On the break away I got out early to take away her angle and the second shot was from long range so it gave me just enough time to adjust to it. I knew the game depended on it and I just did what I had to do.”

“Next for the team is for us to respond and continue fighting on the road,” Cross said.  “We need to go out and play Louisiana Tech and Tulsa, give them tough matches and win on the road.”