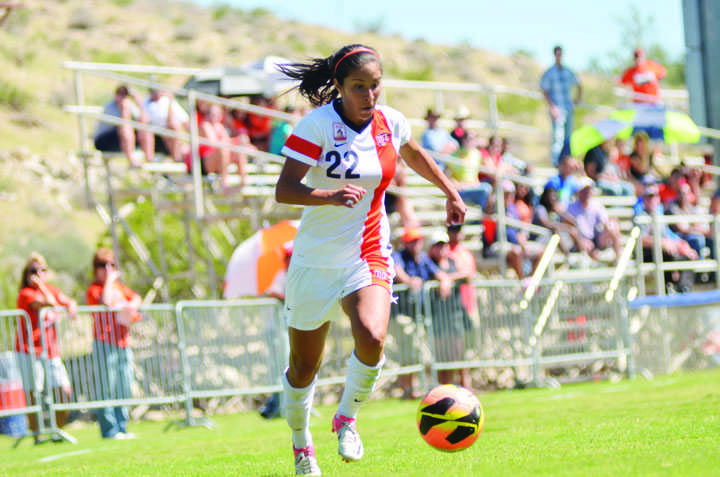 The UTEP soccer team split its first two games of conference play after falling 2-1 to Rice and defeating Southern Miss 1-0 in overtime.

“I was really proud of our team being able to bounce back and get a win,” said head coach Kevin Cross.

The Miners closed their non-conference schedule with four-straight road wins before they faced Rice in  their first Conference USA game Sept. 27

The game was a tale of two halves, the Miners were the team that dominated through the first half, taking shots from all over the box and forcing Owls goalkeeper Amy Czyz to come up with three important saves to keep the game scoreless.

The second half started slow for both teams, but as time went on the Owls started to control the game and pushed forward, but without creating many chances.

UTEP had a lucky break on the 73rd minute as defender Tayler O’Hayre took a free kick from more than 50 yards away, O’Hayre’s long free kick was looking for a teammate who could head the ball, but the wind made the ball sail further. It bounced inside the box and went over the head of Czyz and into the back of the net to put the Miners up 1-0.

However, the team lost focus and Rice immediately tried to take control of the game once again. Finding  gaps on the left side, the Owls sent crosses into the box, and junior Gabriela Iribarne got on the end of one. At the 75th minute, the Owls tied the game at one.

Rice, with the momentum on their side, was able to find space through the left flank, which allowed Holly Hargreaves to push the cross into the net, securing a narrow 2-1 win over UTEP.

“We just lost focus, and we make it a point not to lose focus after scoring a goal or after getting scored on, and that’s exactly what went wrong today,” said senior forward Jade Babcock. “I can assure you that this won’t happen again to us the rest of the season.”

Two days later, UTEP hosted the Golden Eagles and were in search of their first conference win. UTEP tried to break the deadlock early in the game, and just after five minutes, Babcock broke free of the defense and had a one-on-one with the goalie. Babcock chipped her shot over her, but it hit the crossbar.

UTEP kept pushing throughout the rest of the match, and despite having a prolific attack, the Golden Eagles only managed to test Miner goalie Sarah Dilling twice.

UTEP had eight shots on goal and seven corner kicks in their favor, but couldn’t manage to score in regulation. After 90 minutes, the game was still scoreless.

In overtime, UTEP kept the pressure on Southern Miss and in the 94th minute, sophomore Angela Cutaia flicked a ball through senior Azia Nicholson, who had her first effort blocked by goalkeeper Taylor Brittany, but headed the rebound into the empty net to give the Miners the win.

“The defense was awesome today once again,” Nicholson said. “We had a great preseason and a good couple of conference. We just need to work on keeping the ball getting in the box and getting those finishes early on.”

With the win, the Miners are now 8-3-1 and 1-1 in Conference USA. The next two upcoming games for the Miners will be on the road, where they will face Alabama-Birmingham on Oct. 4 and Florida Atlantic on Oct. 6. Their next home match will be against the Charlotte 49ers on Oct. 11.

“I told them to have confidence and that we are going to play well, I didn’t want to put too much pressure on them or panic them,” Cross said. “This was a game we really needed to get, being at home.”