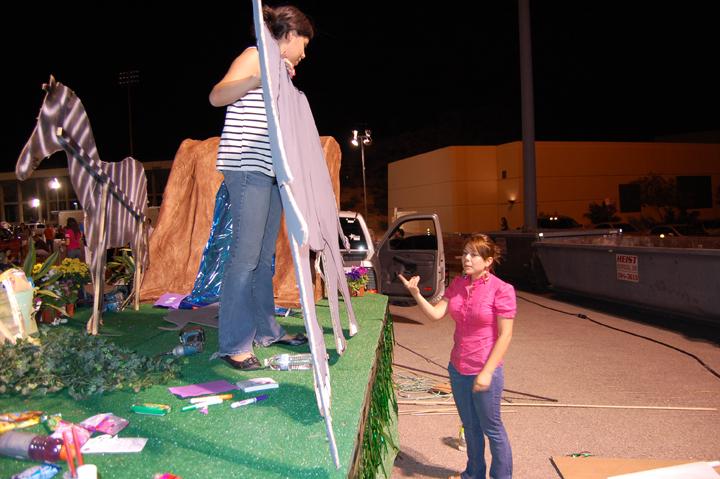 In previous years, students built floats in the P-9 parking lot and were able to use trailers as floats. This year students will be limited to using a vehicle as a float. No trailers allowed.

The 2013 annual homecoming parade, hosted by the Student Engagement and Leadership Center, will take place on the perimeter of campus and on a different day due to inner campus construction, which has forced other events such as Minerpalooza to relocate. Traditionally, the parade was held on Friday, but this year, it will begin at 11 a.m. Saturday, Oct. 5.

This year’s route is different and shorter. Instead of going south on Oregon Street, it will head north and the parade will not enter the center of campus. It will start at University Towers, across from Providence Hospital and go north on Oregon, up to Glory Road. Then the parade will make a left, going west and end on Sun Bowl Drive.

The majority of floats in the parade will be from student organizations. The float-making party will be held at the University Towers parking lot, the same parking lot used for customers at Burger King. In the past, the P-9 parking lot was used for float-making activities, but has been moved in order to keep the participants close to the start of the parade.

Kevin Duran, a junior finance and international business major and a two-year member of the Alpha Kappa Lambda fraternity, said the change of location will affect what their entry into parade because the parking lot is smaller and unable to fit the usual 18 or more trailers as in previous homecoming parades. There’s only enough space for vehicles.

“It affects us in the way floats have been done in the past because we usually have the idea that we’re going to be in a trailer and have different types of measurements, but now it changes the complete way of how we make a float,” Duran said. “Those are the new rules and something we are going to struggle with. We need to make the most out of it and see it as an opportunity.”

The annual homecoming parade traditionally began north of the Sun Bowl area­–parking lot in P-9. It then came off Randolph Drive, down Robinson Avenue, onto Oregon Street and from there it went up onto University Avenue.

“We’re trying to make an opportunity of still having a parade because of the fact that we have a lot of construction going on in the center of campus,” said Richard Daniel, executive director for alumni relations. “We believe that this alternative will be a very good alternative for us this year.”

Alumni Relations takes the lead in everything related to homecoming, including the new parade route.

“We have our police department that’s worked through the city to make sure we close the streets,” Daniel said. “The street closures won’t be very long, so we’ve made sure that there’s no disruptions there.”

A pep rally will immediately follow the parade on Glory Field. In addition to the pep rally, there will also be a showcase of the 2013 Gold Nugget and Distinguished Alumni recipients, as well as the homecoming court. UTEP President Diana Natalicio is slated to give a brief speech.

“We’ve taken all the necessary precautions so that we can be successful and that our students—on Friday night when they are at the float-making party—that they feel like everything will be taken care of,” Daniel said.

Daniel said the new day and time of the parade should open up more opportunities for students and the community to attend.

“We’re hopeful that because it n ow has moved to a Saturday morning, that more community members, more kids—because they’re not in school and we have the parade typically on a Friday morning—that they will be able to join us as well,” he said.

Students, staff and residents of the community may watch from all along the parade route near Miner Village, going up to the Brumbelow Building and the Don Haskins Center.

“This year, we’re hopeful that many more people can join us on that day,” Daniel said.