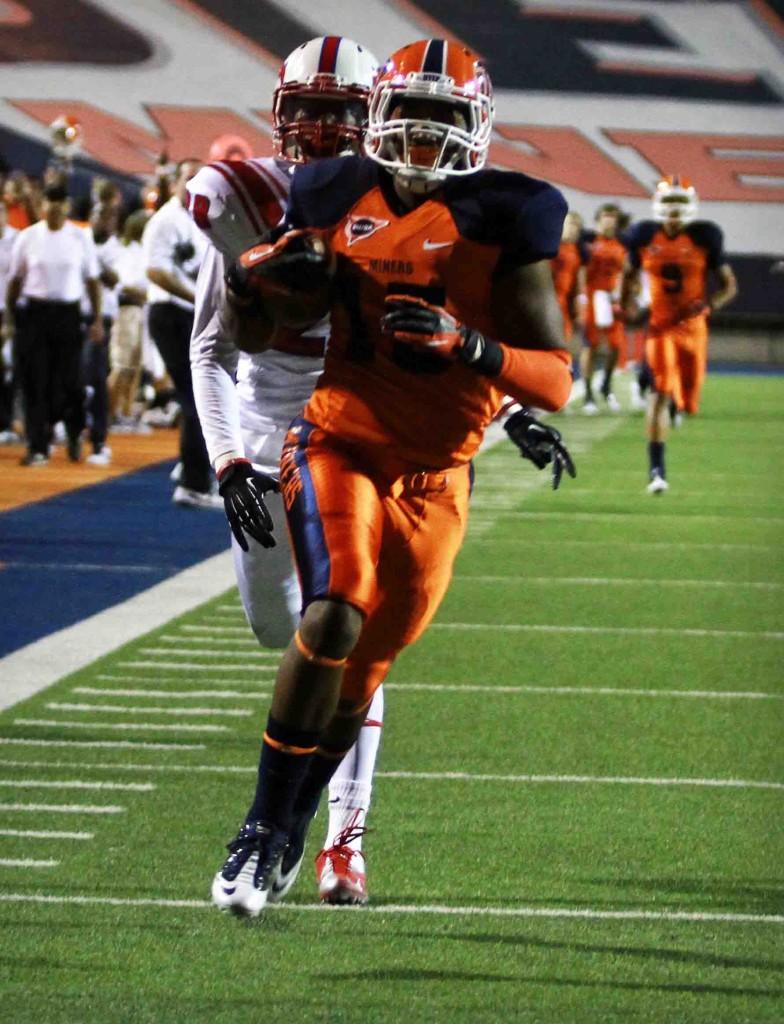 UTEP and NMSU began their rivalry in 1914, the rivalry will hit its centennial mark in 2014.

The 2013 season will bring another edition of the Battle of I-10 between the UTEP Miners and the New Mexico State Aggies. This heated rivalry is 99 years old and represents one of the biggest events for the cities of El Paso and Las Cruces.

Aggie Memorial Stadium will witness another edition of this rivalry as the brass spitoon and the silver spade, which have resided at UTEP since 2009, are at stake.

“It is real intense not only for the players but for the fans as well. Whether we play here in El Paso or in Las Cruces, you can tell that it means a lot to both cities, to the players and the fan bases,” said UTEP head coach, Sean Kugler.“It’s a heated game, no team is going to give in no matter the circumstances, that’s what is great about college football, that’s what is great about rivalries and we are glad to be part of it.”

Sept. 14 will mark the 91st game between the two schools, with the Miners leading the all-time series 53-35-2. The Aggies hold a 19-17-1 edge on the Miners when playing in Las Cruces, but the Miners have won on their last two trips to New Mexico State.

To say the game is the longest-standing tradition that UTEP has is not hyperbole, it’s the truth. UTEP was founded in 1914 and that same year the rivalry between both schools began.

The rivalry might be old, but it definitely sticks with each passing generation, and the UTEP students of today are very much in touch with this contest. Junior mechanical engineering major Zach Jackson, who is a frequent attendee of the football games, is planning to attend all five home games this season, including the short trip to Las Cruces, N.M.

“There’s a lot of excitement in the rivalry, and you should always expect a good game,” Jackson said. “There is no bigger rival than New Mexico State, no one else compares and the games are a lot more interesting, more cheering, yelling. It’s a different atmosphere and definitely a lot louder.”

Going back to the point of tension between the fans, Jackson has experienced that just about as well as anyone. He was in Las Cruces for the game in 2011, when the Miners beat the Aggies 16-10, and he said he knows what kind of hosts the Aggie fans are, or their lack of welcome.

“The fans at NMSU are a lot more disrespectful when the UTEP fans go to Las Cruces, than when NMSU fans come to El Paso,” Jackson said. “When I was there, there was a lot of taunting, booing and many words I can’t repeat, just overall disrespectful.”

With the rivalry almost 100 years old, there is a lot of history between the two programs. The 1998 and 1999 games set an all-time attendance record for both schools (since then, UTEP has surpassed the 1999 attendance record only twice) and the Miners own the most lopsided victory, trouncing the Aggies 92-7 in 1948 in El Paso.

“You have to let players know about the history. How long has it been going on and the pride factor. There have been many close games, many upsets it’s a heated contest,” Kugler said. ‘The rivalry is real intense. There is a lot of trash talking and a lot of bad blood, so all the things you look for in a rivalry, this game has it.”

Both teams are coming off losing seasons, the Miners at 3-9 and the Aggies at 1-11, and with winning being hard to come by for both teams this past season, this game has tremendous importance as both teams would like to get off to a good start this 2013 season. The Aggies haven’t defeated the Miners since 2008, and the Miners would like to keep it that way.

On Sept.14, the Miners are going for their fifth-straight win against their biggest rival and their third-straight win at Las Cruces.