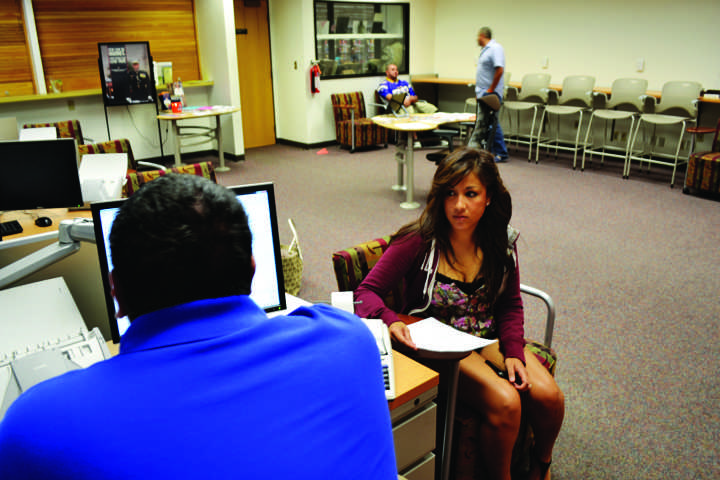 Laura Rabara, senior nursing major and U.S. army veteran, receives counceling at the center. She served two tours in Iraq between 2005-06 and 2008-09.

The Military Student Success Center has kept busy this summer since its opening in April after the center moved from its previous location at the Mike Loya Academic Services Building.

About 30 to 40 student veterans filter through the office each day. They receive counseling on enrollment, declaring majors, what their degree plan looks like and what kind of classes they have to take.

“We’ve had a pretty steady flow of students come into our office because they’re using their benefits, which is a good thing, we like being busy,” said Holly Denney, director of the center.

Denney said there may be a combination of factors that have caused the growth, including increasing outreach to veterans, an increasing number of classes and programs available online, increased emphasis on education while serving in the military and the fact that some benefits can be transferred to family members.

Nadia Orozco, graduate student and a U.S. army veteran, served one tour in Afghanistan from 2010-11.

She said it is helpful for veterans to know what to expect as a student.

“Putting my mindset as a soldier who went straight out of high school to the military, I can definitely see where it would be a little more difficult for them to manage their time between how often they study or even how to get to their classes,” she said.

Sometimes, student veterans may need help transitioning back to civilian life. The center provides that assistance.

“When I would tell a soldier or veteran who was kind of lost out there, I would say, ‘it’s not scary to ask, no one’s going to yell at you here, no one is going to get on to you for what may appear as a dumb question,’” Orozco said. “When I was a freshman in my undergrad, I felt really lost…you figure it out slowly—as long as you don’t give up.”

The process of filing Veterans Affairs paperwork can contribute to the confusion. Student veterans use the G.I. Bill to pay for school. Denney said there are quite a few who are using the Post-9/11 G.I. Bill. They also process Hazelwood benefits, which is state exemption for Texas veterans.

Denney explained that the VA will pay UTEP the amount the student is entitled in benefits.

The Post-9/11 G.I. bill does have a scale that, depending on the length of service, will pay a certain amount of benefits that can range from 40 to 100 percent of college expenses.

“If we certify a $1,000 in tuition and fees and the student is entitled to 100 percent, then the VA pays UTEP the $1,000,” Denney said. “In addition, they are entitled to a (Basic Allowance for Housing) and a book allowance.”

Other chapters of the VA pay directly to the student. That is a speculated monthly amount that is sent by the VA and is subject to review on a monthly basis.

Orozco said veterans can go into the MSSC for help with anything in regards to school and the VA.

“We’re here for our (student) veterans. If there’s anything they need or we can help with, we are partnering, starting this semester, with the counseling center,” Denney said. “We will have some of their staff over here three days a week. So that if they would like to come talk with someone, it’s not actually counseling. The staff will be here to listen to the soldier’s concern.”

The MSSC is located at the UTEP Library, room 205. They also have a full-time staff member at the Fort Bliss Education Center, building 406. For more information on the Fort Bliss location, call 744-1382.