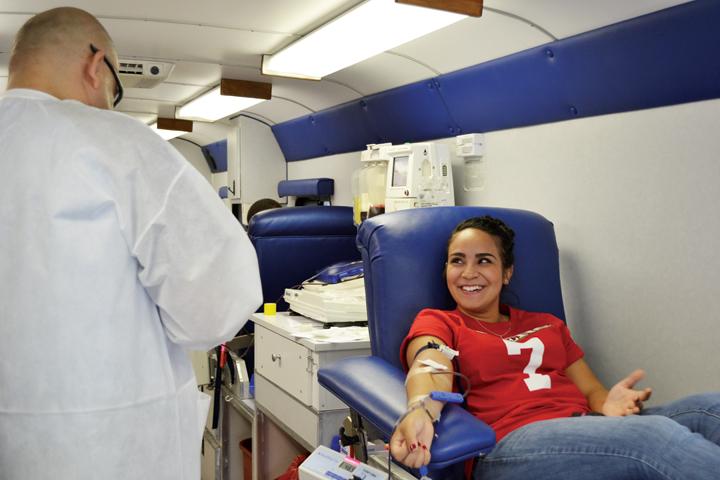 Monday afternoon marked the kick-off of the 10th annual I-10 college coalition effort between United Blood Services, UTEP and NMSU. It’s something that brings the two universities together to meet patient needs in the communities.

“Whatever blood is collected this week will be used in our communities,” said David Veloz, regional donor recruitment and director for Texas at United Blood Services.

“As far as this effort is concerned, our goal this week is to collect more than a thousand blood donations.”

The first year of the coalition effort collected about 500 blood donations and every year it’s been increasing, Veloz said.

Veloz added that typically, people only donate blood once a year, but are encouraged to donate blood twice a year.

“Blood is needed for many, many different reasons,” he said. “It could be somebody that was in a car accident that suffered a trauma. It could be a patient with cancer who’s going through chemotherapy and they might need blood transfusions.”

“It’s a great way to start off the week in the rivalry,” she said. “I was just kind of lured in. I had a break so I thought I’d take advantage and do something good.”

She said she was a bit overwhelmed after seeing the four bags that would store her blood.

“It took like ten minutes to pump out the blood, saving three lives,” Alvara said.
“I’m pretty sure it’s worth it. For ten minutes of your time, it’s pretty worth it.”

UTEP President Dr. Diana Natalicio said the week-long event is one way students can give back to the community.

“We’re a healthy, young population on campus. 23,000 healthy, young people for the most part who are able to contribute blood,” she said in an interview prior to the event kick-off. “It makes such a difference. Every pint of blood they say saves three lives. When you think about it that way it’s pretty amazing what you can do.”

Although this is a part of the rivalry between two campuses, the blood drive is seen as more of a friendly competition.

“It is nice to think both institutions during the week of our football game get to kind of step up and say, ‘alright, we’re going to beat the other school in quantity of blood given and the football game,’” Natalicio said.

The blood drive will end on Sept. 13 and the results will be announced at the UTEP-NMSU game on Saturday at Aggie Memorial stadium.

The United Blood Services will have stations located outside the education building, inside and outside the Undergraduate Learning Center building and at the alumni house.