Presentation of State of the Border analysis delivered at UGLC 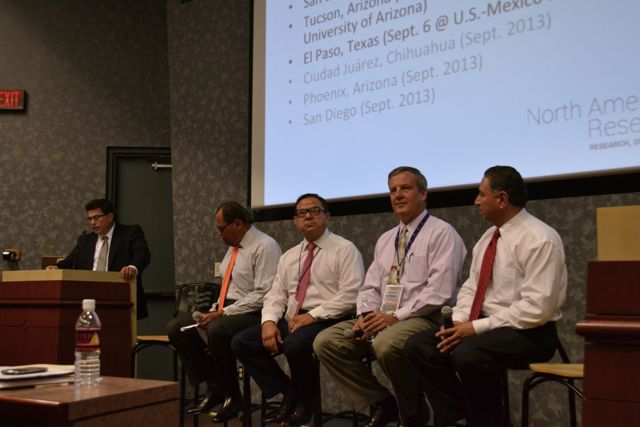 Several border officials presented the State of The Border Report at an event Friday afternoon at the Undergraduate Learning Center building. The report included the status of trade and competitiveness, security, sustainability and quality of life on the border.

President Diana Natalicio began the presentation with an opening welcome and discussing UTEP’s role in education on the border.

“We believe that both the amount of resilience and ingenuity from UTEP students on both sides of this border will ultimately provide the 21st-century work force needed to insure sustained economic competitiveness, security and quality of life in both the U.S. and Mexico,” Natalicio said.

The event saw about 150 people in attendance and was sponsored by UTEP, the Borderplex Alliance, The Border Legislative Conference, the Wilson Center’s Mexico Institute and the North American Research Partnership.

Christopher Wilson, associate at the Wilson Center Mexico Institute and co-author of the report, delivered the center’s findings.

“Too often the border is portrayed and seen mostley through a security lense,” he said, adding that drugs, cartels, violence and illegal immigration are what American’s think when they hear about the border.

Wilson said though there has been an increase in border trade and production, wait times at ports of entry are costing companies large amounts of money.

He said an area of interest is the trusted traveler and shipping programs, through which truckers and other trade officials can cross the border faster and save money.

The study found that the overall quality of life on both the U.S. and Mexican sides of the border region improved between 2000 and 2010.

There needs to be a push of key security processes away from the border by both federal governments in order to keep the border secure, said Erik Lee, associate director of the North American Center for Transborder Studies, and co-author of the report.

He said the method to measuring border security also needs readjustment as it now focuses on the number of apprehensions and deportations. Lee added that the U.S.-Mexico border is not where terrorism occurs.

A complete copy of the report can be found here.