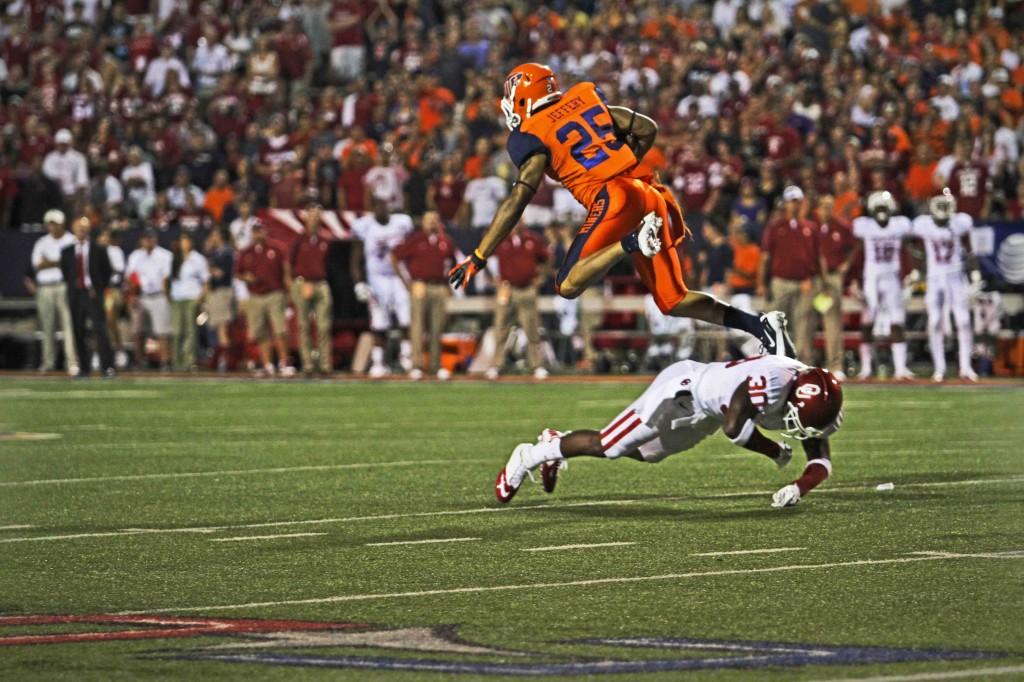 The Miners are set to start their 2013 campaign on Sept. 7 against old rivals, the New Mexico Lobos, at the Sun Bowl. It will also be the kickoff for the beginning of the Sean Kugler era as head coach.

“I’m looking forward to the game,” Kugler said. “Having been a player here, having been a coach here and to go back out in the Sun bowl as a head coach, of course there is that extra energy.”

Both the Miners and Lobos are in the process of making adjustments and both are coming off losing seasons–UTEP finished 3-9 and New Mexico 4-9.

Lobos head coach Bob Davie is in his second year at the helm and has only 10 returning starters from last season.

“UTEP playing New Mexico and NMSU back-to-back, it’s outstanding,” Kugler said. “All of us should play each other every year and it’s great for the three cities; El Paso, Albuquerque and Las Cruces.”

The Lobos are also coming off a 21-13 home loss to the UTSA Roadrunners on Aug. 31. Sophomore quarterback Cole Gautsche, who started for the Lobos, was pulled from the game in the fourth quarter after experiencing concussion-like symptoms and is questionable for the game against the Miners.

The Lobos bring a triple-option offense, in fact Gautsche has proved to be a better runner than passer. In 2012, he completed only 42 percent of his passes, and during the Lobos first game Gautsche completed four out of 12 passes, but managed to gain 118 yards rushing in 16 carries.

“New Mexico has a very difficult offense to defend. It’s a triple-option offense with some priciples of the pistol,” Kugler said. “Last year they rushed for 301 yards per game which made them one of the best in the country.”

The Lobos lost their three starting wide receivers from last year and don’t seem to have the weapons to challenge a new and somewhat inexperienced secondary of the Miners.

“Their secondary, it’s a lot like our own, made up of players who are not too experienced” Kugler said. “The players that return for them are very good and know how to make plays.”

The Lobos only obtained 84 yards through the air and 277 yards of total offense in the game against UTSA.

The Miners, who had their first week of the season off, are trying to use the extra week of preparation to their advantage.

“It’s great, at first it didn’t seem as it was going to be a big deal, but now it really is,” said Scott Stoker, defensive coordinator. “We needed the extra week to prepare for their triple-option offense.”

The Miner offense has a core of experienced players, who had the opportunity to work with each other throughout the summer.

“I’m very pleased wih our players preparation,” Kugler said “There is sill work to do but the players have done a tremendous job during the offseason and in Alpine.”

Kugler stated that despite having injuries, both Nathan Jeffery (Sprained toe) and Richard Spencer are expected to be ready to play in the game. Senior linebacker Horace Miller (hamstring) hasn’t been ruled out for the game yet, but he might take an extra week to fully recover.

The moment many fans have been waiting for has arrived as the new era for UTEP football, led by Kugler, will begin at 6 p.m. Saturday at the Sun Bowl.

“It’s always exciting to play at the Sun Bowl, there is always a lot of energy at the Sun Bowl,” Kugler said. “The fans here are outstanding and I can’t wait to watch the players go at it on saturday night.”