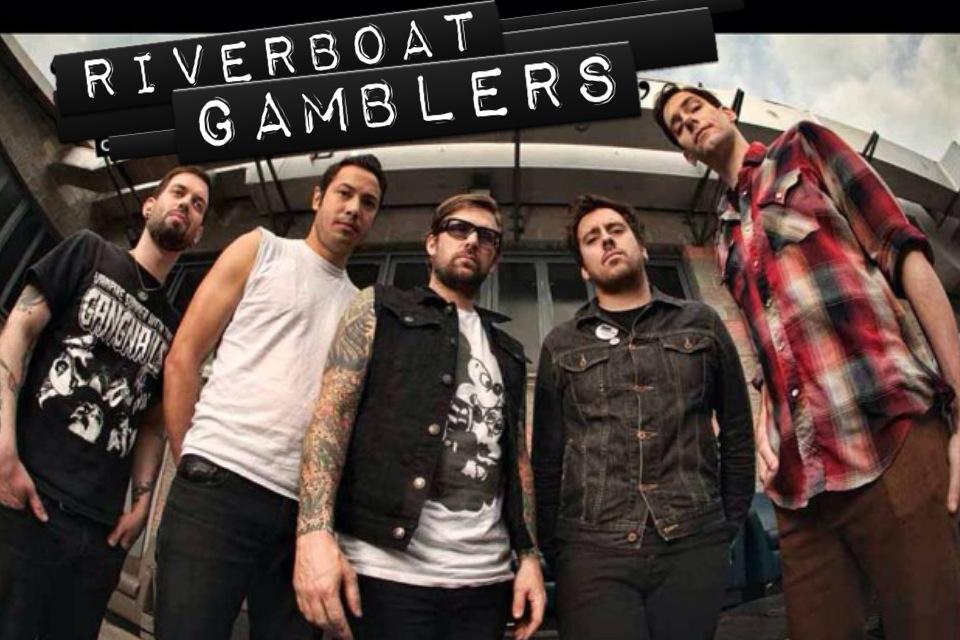 For over a decade, from house shows to the Warped Tour, the Riverboat Gamblers have delivered charismatic performances at their shows. This Texas band has a sound that their vocalist, Mike Wiebe, described as a meeting of garage rock, punk rock, pop and rock ‘n’ roll.  In 2012, the band released their sixth studio album, “The Wolf You Feed,” which Wiebe said has been a progression in his song writing and production. This fall, the band–which includes Fadi el-Assad (lead guitar), Ian McDougall (guitar), Rob Marchant (bass) and Ian Walling (drums)–will begin the process to work on their seventh studio album.

But tonight, the Riverboat Gamblers will perform at Tricky Falls.

Wiebe took some time prior to the show to talk to the Prospector.

The band has been around for a good amount of time, how do you guys manage to stay around in a rapidly changing scene?

I’m guessing just either stupidity or stubbornness, probably a little bit of both. I think some of it is just we never neatly fit into a genre per say. It is odd that we’ve been around this long. It’s kind of crazy.

Has working with Volcom Entertainment been a lot of help as well?

Well…it was, until they went under. The label is no more, which happened a couple of months ago. We’re trying to find out what our next move is as far as all that stuff, but yeah, that’s another kind of casualty of the music industry. It’s really tough to try and (make) a living in this industry, in this climate.

The Internet and all this digital stuff have changed everything.

Yeah, it’s definitely changed the game entirely. I don’t mind change or anything; it’s just sometimes hard to figure out how to do things effectively now. The rules are different.

What are your thoughts on the current state of the music scene?

Well it’s different. It feels like it’s a lot more difficult to be a middle-class band. Gas prices are very expensive to tour, so I think a lot of good bands aren’t really touring as much. It’s more like these really big high-level bands that are getting to tour a lot more. It’s hard but there are a lot of people out there that are doing it and giving it a shot.  There’s always a group of younger people coming out. I at some point stop, I don’t know if I pay as much attention to what the rest of the world is doing. We just try to stay busy.

“Yeah, my hand is pretty messed up. I think part of the idea, as a band, is to just put on a show and performance and have it be fun.

What do you think of the Texas scene when it comes to music?

Austin is really cool. There are a lot of cool people doing really interesting stuff. In Denton, where we’re from originally, it’s a really cool scene. It’s a real good place to play often and develop your chops. We were a house show band for a long time. But those are only two spots in Texas that I really know of. For rock, anything vaguely like we do, I don’t know about much coming out of Dallas, Houston…I know a few bands out of El Paso and (Las) Cruces like Low Culture and stuff like that. But yeah, it’s weird. Dallas and Houston are these enormous cities and there’s not a whole lot of stuff that I’m interested in hearing coming out of there. But Houston has a great hip-hop scene.

So have you ever heard of At the Drive-In from El Paso?

Yeah, they played a house show back in Denton, Texas before they got enormous.

I really like the band’s album, “Underneath the Owl.” I can’t really pinpoint it to one genre. It’s just a good rock album.

So the band has only been on two Warped Tour’s. Are you going to do another?

We’ve done two; we did 2005 and 2010. But we definitely, on that 2010, we definitely decided we didn’t want to do this again. It’s really become different, which is fine and I’m not really bagging on it. But now it’s just like the kind of music that we do doesn’t fit in there anymore. I think our audiences are a little bit older and warped tour audiences are probably a little too young for what we’re doing.

Yeah, I stopped going to Warped Tour after I noticed the music scene changed.

I don’t know, maybe it didn’t change. Maybe we just got older.