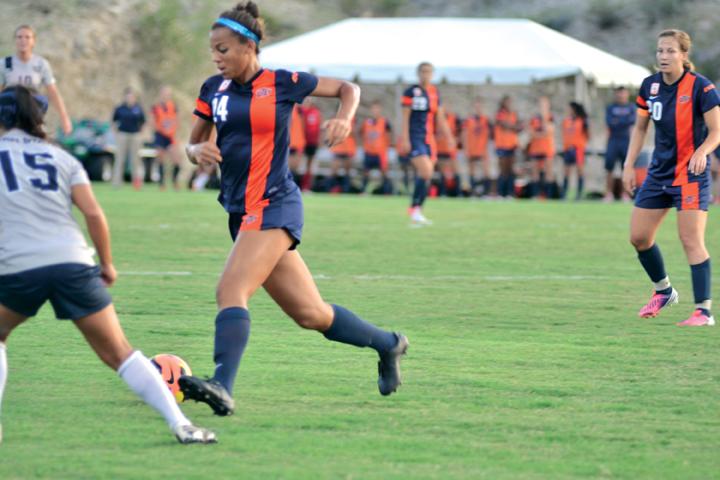 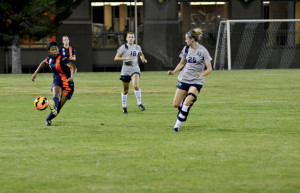 With an early goal from Kylie Dibbs in the 47th minute, the Utah State Aggies held onto a 1-0 victory over UTEP who suffered its first setback of the season.

It was the Miners who started in the best fashion, on the fifth minute after a long pass to the box, Azia Nicholson found the ball, but her shot went over the bar.

Three minutes later, midfielder Tori Martyn found space on the left flank and managed to dribble her way into the box and served the ball to the middle and after a series of rebounds Nicholson found the ball and Utah State goalie Jeannie came up big and saved the shot.

“We were on fire at the beginning and we had a couple but just couldn’t finish them,” said freshman midfielder Hannah Nicholson. “In the second half we were pretty pumped up and we both played really hard, they are a good opponent and I’m proud of the way my team played.”

Utah State was able to push the Miners back for the rest of the first half however on a rebound of a corner Gina Soto found herself alone on the edge of the box and tried to curl her shot into the far post, but the ball went just wide of the target. The Aggies managed to create some chances but nothing challenging for the Miners.

“That’s was not good, we try to start halves strong and I’m disappointed,” said UTEP head coach Kevin Cross. “I rested the starters in the first half to come fresh for the second half and I thought we were gonna be on fire and we weren’t.”

On the 59th minute UTEP had another good chance as senior forward Jade Babcock’s free kick attempt  was once again denied by Woller who managed to keep it out of the net.

As the game went on Utah State dropped back to hold on to their lead, which allowed UTEP to maintain the ball in the opposite half. In the 68th minute shortly after coming in as a substitute Nicholson took a shot to the left corner of the goal only to see an acrobatic save by Woller.

“I was very nervous because I took the shot with my left foot and I’m right-footed,” Nicholson said. “After I took it, I just visioned it going into the corner, but the goalie somehow kept it out.”

“We felt like we dominated the whole game and Utah State is a good team, we were solid but we need to bring it all,” Katada said. “I thought I had a good game, I had a couple of chances, but couldn’t get it in.”

With the loss, UTEP is now 2-1 and will be back at University Field on Sunday as they host Abilene Christian at 1 p.m.

“We played a pretty good game. I think we played good soccer,” Cross said. “Soccer is a game of chances and we didn’t finish our chances and they capitalized on a mistake.”